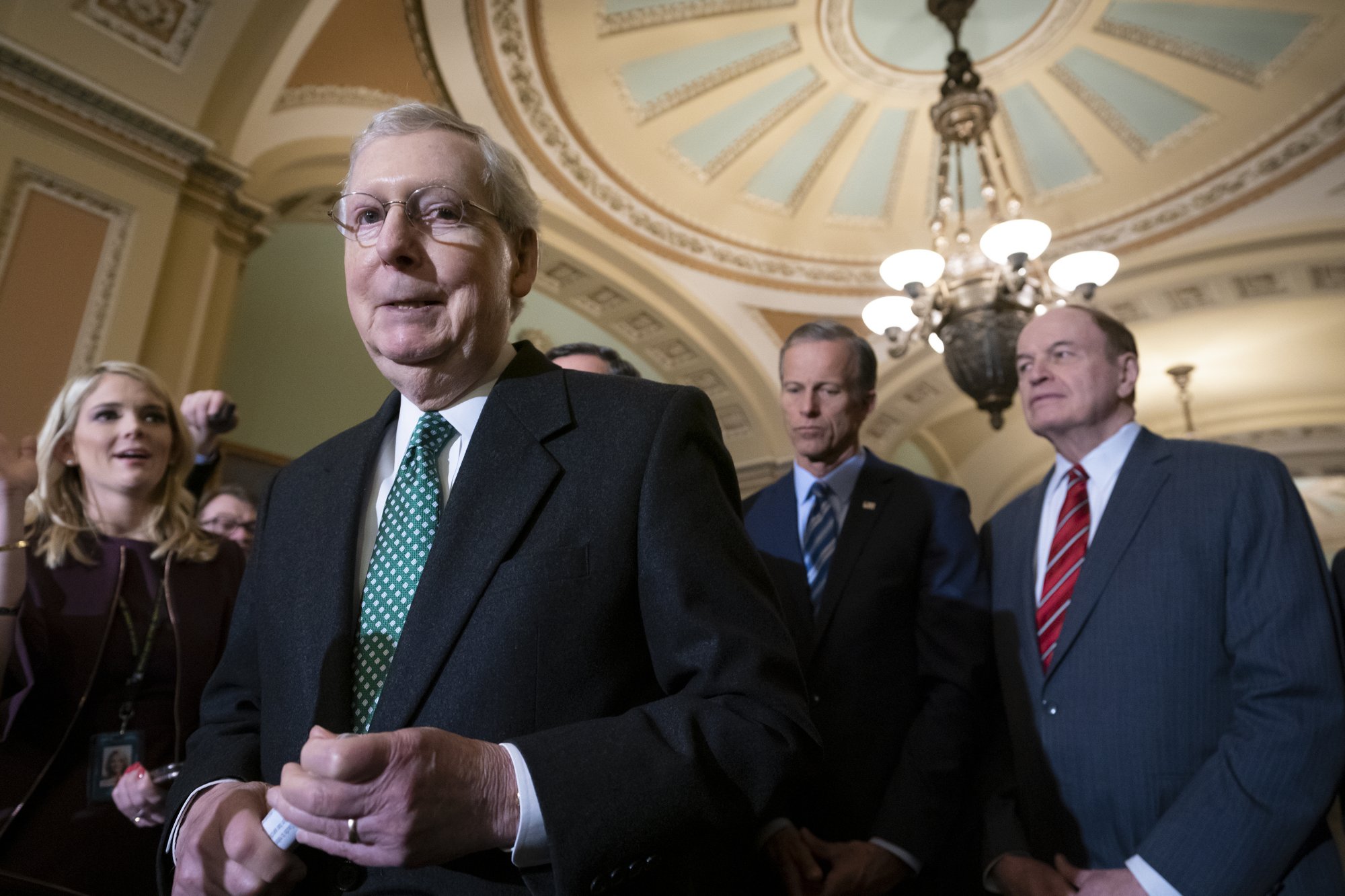 US President Donald Trump’s declaration of a national emergency to build his long-promised border wall ends one political problem for the White House and its allies on Capitol Hill, but launches another.

Republicans are deeply torn over Trump’s decision to invoke executive power after Congress denied him money he wanted for the wall along the Southern border. Some are backing the president, while others are vehemently opposed to what they see as constitutional overreach, setting up a potential showdown that adds to the already expected legal challenges.

“I don’t believe a national emergency declaration is the solution,” said Sen. Thom Tillis, R-N.C., who warned of taking the country down a “rabbit hole” with future presidents seizing unchecked executive power.

It’s an outcome Senate Majority Leader Mitch McConnell and his leadership warned Trump against. For days, they publicly urged him not to declare an emergency. But with Trump’s signature Friday on the action, the Republican leaders are largely falling in line behind Trump.

As Democrats are quick to call for oversight and investigation, they are also almost certain to seek a vote of disapproval that will force Republicans to stand with the president — or against him.

House Judiciary Chairman Jerrold Nadler, D-N.Y., says his committee will investigate the “serious constitutional and statutory issues” raised by the declaration and will ask White House officials to appear for testimony.

Nadler said Trump’s decision shows “reckless disregard for the separation of powers and your own responsibilities under our constitutional system.”

The ranking Republican on the House Judiciary Committee, Rep. Doug Collins of Georgia, said that while he supports Trump’s commitment to securing the border, “a national emergency is a serious act with deep implications, and it’s disappointing that partisan politics have brought us to this point.”

Congress has specific ability under the National Emergencies Act to halt the president by a simple majority vote of disapproval in both chambers. That makes the outcome uncertain, especially in the Senate where Republicans now hold a narrow 53-47 majority.

Trump would almost certainly threaten to veto such a resolution, if it passed, and Congress would then be faced with the difficult task of mounting the votes to override.

“Congress has the tools available to stop this if it chooses to act,” Edelson said. “All eyes should be on Republicans in Congress, some of whom are clearly troubled by this action, including the precedent it could set.”

Top Trump allies are splintering. GOP Sen. Lindsey Graham of South Carolina, once resistant to an emergency declaration, told Fox News he’s all for it. “We would be idiots as Republicans not to support Donald Trump to try to build this wall anyway he can,” Graham said.

Sen. Rand Paul, R-Ky., may be tougher to sway. “I, too, want stronger border security, including a wall in some areas. But how we do things matters,” Paul said in a statement.

“Extraconstitutional executive actions are wrong, no matter which party does them,” added Paul, who regularly criticized former President Barack Obama for what Paul and other Republicans termed executive overreach.

On and off Capitol Hill, many Republicans criticized Obama for what they saw as executive overreach, particularly on immigration issues. Some of Obama’s actions, including those to shield young immigrants from deportation, continue to play out in the courts.

While some GOP voices this week urged Trump on, others encouraged restraint.

“We’ll regret this,” said a headline in the conservative National Review. The U.S. Chamber of Commerce said Friday that Trump’s decision will “create a dangerous precedent that erodes the very system of government that has served us so well for over 200 years.”

Rubio and others have asked what would happen if a future president tried to use the same emergency authority for their priorities — for example, to impose gun control or fight climate change.

Newly-elected Rep. Ilhan Omar, D-Minn., suggested as much in a Friday tweet: “Our next President should declare a #NationalEmergency on day 1 to address the existential threat to all life on the planet posed by Climate Change.”

But Rep. Mark Meadows, R-N.C., another Trump ally who chairs the conservative Freedom Caucus, said there’s “wide support” in the party for Trump’s action. “There’s certainly a big push to make sure that we limit executive power,” he said, but the laws are in place and “we support it.”

Democrats are already gearing up to do battle. Rep. Alexandria Ocasio-Cortez of New York tweeted Friday that Democrats “aren’t going to let the President declare a fake national emergency without a fight.”

Rep. Joaquin Castro, D-Texas, chairman of the Congressional Hispanic Caucus, was introducing a resolution to terminate the declaration, which he called “an end run around the Constitution.” The joint resolution, he said, “will allow Congress an opportunity to reclaim its authority.”

In the end, the philosophical arguments about presidential powers may run into the more specific concerns about how Trump plans to pay for the wall.

White House officials said Friday they plan to spend $8 billion on the wall — the nearly $1.4 billion Congress approved for new fences and barriers, plus more than $6 billion drawn from other funds.

Among them is a military construction account popular on Capitol Hill because it provides money to improve housing, medical facilities, roads and other aspects of military life. The projects are spread throughout congressional districts nationwide.

A group of House Republicans urged Trump in a letter not to shift money away from military construction accounts. “Diverting funding from ongoing or planned projects would be incredibly harmful,” the GOP lawmakers wrote.

Among those signing the letter, Rep. Mike Turner, R-Ohio, said it’s a “dangerous precedent for the president to be forced to declare a national emergency” over funding.

The White House said it would be looking at “lower priority” projects. A senior administration official granted anonymity to brief reporters on a conference call Friday said officials will look to shift money from projects that are “to fix or repair a particular facility that might be able to wait a couple of months into next year.”