US President Donald Trump and Canadian Prime Minister Justin Trudeau were all jokes and smiles for the media as they met at the Group of Seven leaders summit in Quebec on Friday, but neither budged on the serious trade dispute between them. 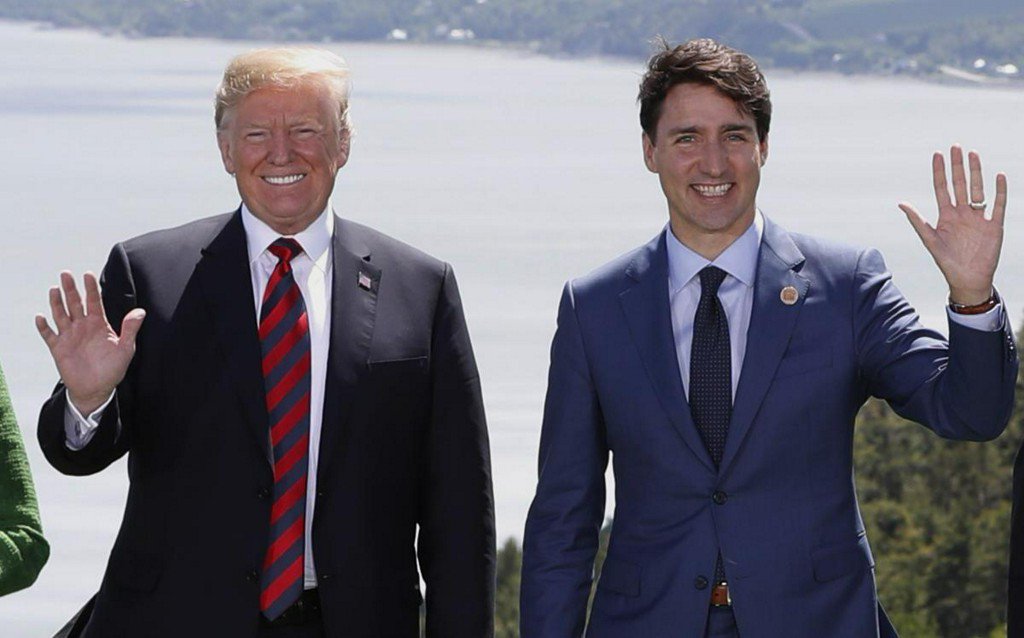 US President Donald Trump and Canada's Prime Minister Justin Trudeau pose with other leaders (not pictured) for a family photo at the G7 Summit in the Charlevoix city of La Malbaie, Quebec, Canada, June 8, 2018. (Photos: Reuters)

In the brief photo opportunity that started their bilateral meeting on the sidelines of the fractious G7 summit, Trump followed Trudeau’s diplomatic introduction by joking that Trudeau had backed down on retaliatory tariffs.

“Justin has agreed to cut all tariffs, all trade barriers between Canada and the United States, so I’m very happy,” Trump told reporters.

Trudeau was quick with his riposte: “So I’d say NAFTA is in good shape.”

Canada last week announced retaliatory tariffs on C$16.6 billion ($12.8 billion) worth of US exports and said it will challenge US steel and aluminum tariffs under the North American Free Trade Agreement and the World Trade Organization.

The tit-for-tat dispute over US metals tariffs followed more than a year of tense and so far unsuccessful negotiations to renew NAFTA and a long and failed charm offensive by Trudeau and top Canadian officials to avoid Trump’s trade ire.

Trump repeatedly attacked Canada on Twitter in the days leading up to the two-day summit in La Malbaie, Quebec with Trudeau and the leaders of Germany, France, Britain, Japan and Italy.

“Prime Minister Trudeau is being so indignant, bringing up the relationship that the US and Canada had over the many years and all sorts of other things ... but he doesn’t bring up the fact that they charge up to 300 percent on dairy — hurting our Farmers, killing our Agriculture!” Trump tweeted Thursday.

Trump is scheduled to leave the contentious G7 summit four hours earlier than originally planned on Saturday to fly to Singapore for his June 12 meeting with North Korean leader Kim Jong-un.

“Are you disappointed the President is leaving early?” a reporter asked Trudeau.