Tusk says EU would respond to US tariffs on French wine, warning on trade war risks 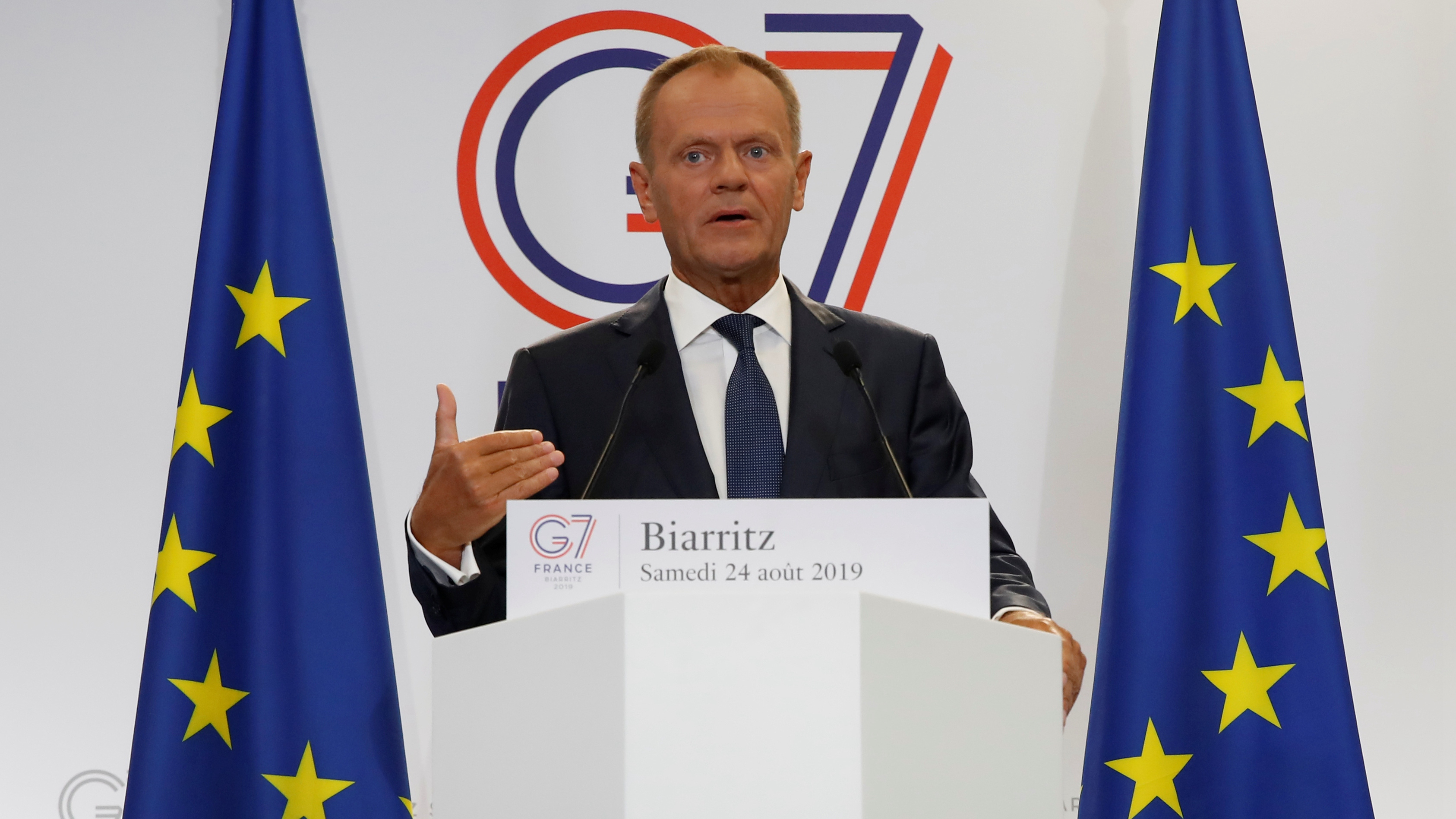 European Council President Donald Tusk speaks during a news conference on the margins of the G7 summit in Biarritz, France, August 24, 2019. (Photo: Reuters)

European Council President Donald Tusk said on Saturday that the bloc would retaliate against the US if President Donald Trump goes ahead with his threats of imposing tariffs on French wine, warning that Trump's escalating trade skirmishes with China and Europe could force economies around the world into recession.

"For me, it's absolutely clear that if someone, for example, the United States and President (Donald) Trump, uses tariffs and taxation as a political instrument for some different political reasons, it means that this confrontation can be really risky for the whole world, including the EU," he said.

Tusk made the remarks as leaders of the Group of Seven (G7) countries descended on the French resort town of Biarritz for a three-day summit.

It was a combative opening to the G7 summit, traditionally a forum for frank yet cordial discussions among leaders from the world's leading economies – but much less so since Trump's election.

Just before leaving Washington for the summit, Trump threatened to tax French wine "like they've never seen before" in retaliation for Paris imposing a three-percent digital tax on US tech giants like Google, Facebook and Apple.

"I will protect French wine with genuine determination," Tusk said. "If the US imposes tariffs, the European Union will respond in kind," he said. "This is not our initiative, this trade and tariff struggle, but we have to be ready and we are ready."

"The last thing we need is a confrontation with our best ally, the United States," he added.

Trade deals and WTO reforms instead of trade wars

Trade wars will lead to recession, while trade deals will boost the economy, Tusk said, calling for putting a stop to trade wars. "Trade wars among G7 members will lead to eroding the already weakened trust among us."

French President Emmanuel Macron, the summit's host, also warned of the widespread fallout from the trade disputes. In a televised address to the nation from Biarritz, Macron said his goal was "to convince all our partners that trade tensions are bad for everyone."

And he vowed to work on "a real recovery" for the global economy. "We have to achieve some form of de-escalation, stabilize things, and avoid this trade war that is taking place all over," he said. "We have to work for more growth, and more jobs," he added.

The trade disputes have jumped to the forefront of this year's G7 summit.

Wall Street stocks slumped Friday after Trump escalated his trade war with China that is seen as responsible for a global slowdown.
"We don't need China and, frankly, would be far... better off without them," Trump tweeted on Friday, saying US companies were "hereby ordered to immediately start looking for an alternative to China."

His outburst came after China imposed tariffs on US imports worth 75 billion US dollars in response to an earlier round of American measures. Trump hit back immediately, raising tariffs still further.

Besides China and France, the US is currently at loggerheads with many countries, including the G7 alliance on issues ranging from trade to security. Threatening Germany with car tariffs, casting Canada as a trade villain who "robs the US blindly," Trump also sniffed at the European integration by encouraging Brexit with a "great trade deal" with London.

This year's G7 summit will be "a difficult test of unity and solidarity," Tusk stressed.

"There is still no certainty on whether the group will be able to find common solutions – and the global challenges are today really serious - or whether to focus on senseless disputes among each other."