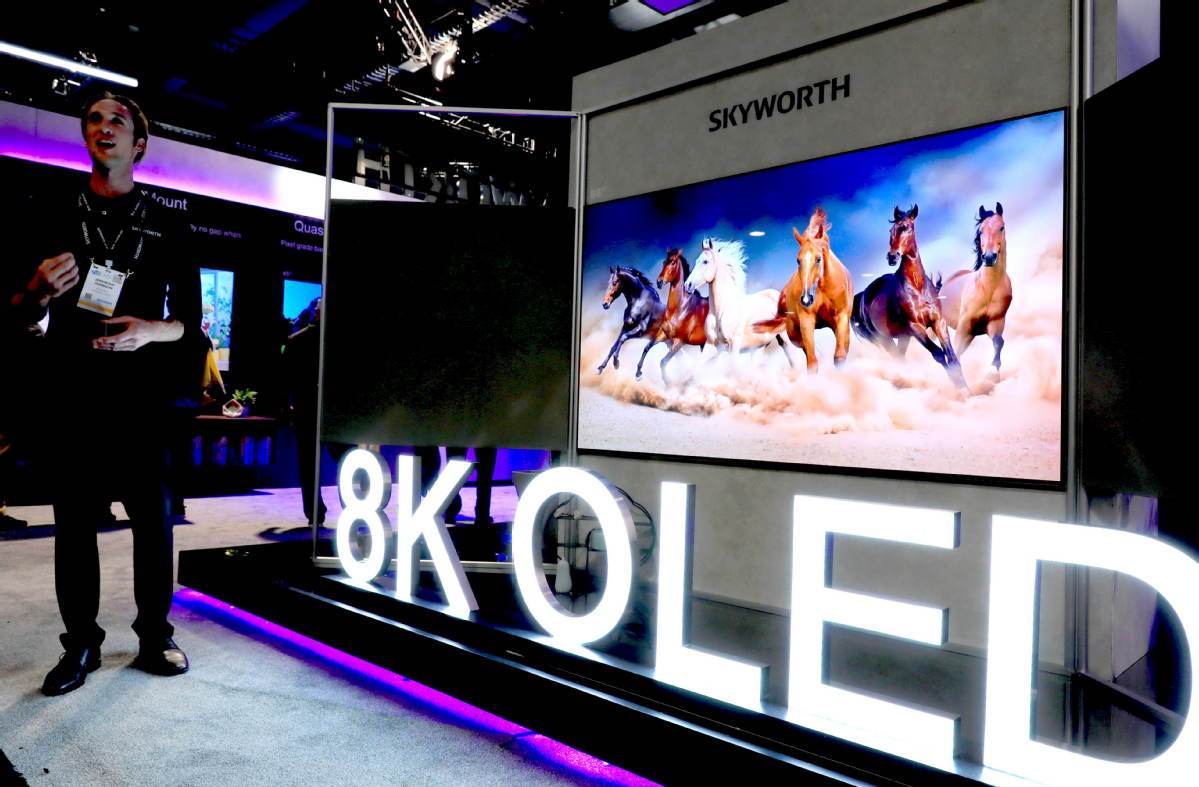 Chinese television manufacturers are banking on the cutting-edge organic light-emitting diode (OLED) TVs whose sales witnessed robust growth this year, with the aim of seeking new growth points and driving the upgrading of the traditional TV industry.

Data from market consultancy All View Cloud or AVC showed that TV sales reached 36.33 million units nationwide from January to October this year, down 3.1 percent compared with the same period last year.

However, the accumulative sales of OLED TVs rose 21.8 percent to 154,000 units in the January-October period, with Skyworth topping the list in OLED TV shipments in the domestic market, according to AVC.

OLED is a relatively new technology and part of the recent innovations in display. It has a fast response rate, wide viewing angles, super high-contrast images and richer colors. It is much thinner and can be made flexible, compared with traditional LCD display panels.

Tang Xiaoliang, chief brand officer of Shenzhen Skyworth-RGB Electronic Co Ltd, which is a subsidiary of the Skyworth Group, said the company plans to invest 200 million yuan ($28.5 million) in a marketing campaign during the spring's peak season as part of a broader drive to bolster the transformation and upgrading of the whole TV industry.

Skyworth is transforming itself into a high-tech and innovation-driven company, having invested heavily in OLED technology, self-developed chips that are used to improve the quality of the image, and the big-screen AIoT ecosystem, Tang said.

AIoT, which means artificial intelligence of things, is the combination of AI technologies with the internet of things infrastructure to improve human-machine interactions and enhance data management and analytics.

The company has been producing OLED TVs in partnership with South Korea's largest panel maker, LG Display, since 2013.

Statistics from AVC showed sales of Skyworth OLED TVs accounted for 46 percent of total OLED sales in the Chinese market in 2017, followed by LG with 16 percent and Sony at 14.9 percent.

LG Display is the only company capable of mass producing large-sized OLED screens globally. In August, the company's production plant began operations in Guangzhou, the capital of Guangdong province.

With an investment of 46 billion yuan, the plant will be able to manufacture 60,000 glass substrates per month at the preliminary stage. That will be used for 4K ultra-high-definition large-sized OLED TVs in sizes of 55 inches, 65 inches and 77 inches.

Another home appliance giant, Hisense Group, has jumped on the bandwagon and launched its own 55-inch and 65-inch A8 series OLED TVs in March.

The OLED TVs will be the future development direction of the TV industry and present an opportunity for TV manufacturers to expand their profit margins, said AVC President Wen Jianping.

Li Yaqin, general manager of Sigmaintell, said the 65-inch TV will become the mainstream screen in people's living rooms in the future, but that OLED TV will not be able to immediately trigger customer purchases at this time although most current consumers are technophiles and high-end users.