The use of China-made ARJ21 regional jets is set to expand after a cooperation agreement between two Chinese airlines was reached in Hohhot City, Inner Mongolia Autonomous Region. 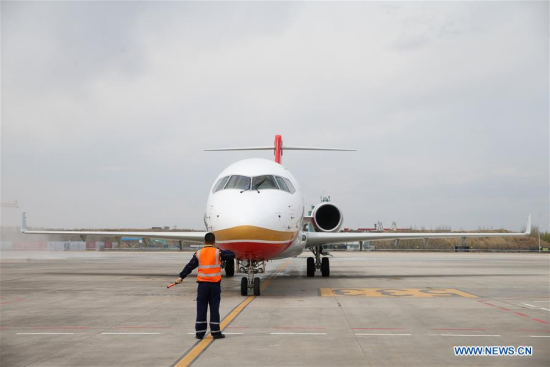 Genghis Khan Airlines, a newly approved company based in Inner Mongolia, and Chengdu Airlines, based in Chengdu City of Sichuan Province, are both customers of ARJ21 jets, developed by the Commercial Aircraft Corporation of China, Ltd.

Genghis Khan Airlines plans to draw on the experience of Chengdu Airlines in operating ARJ21 jets and expand the market in the autonomous region.

Chengdu Airlines is the "launch customer" for the ARJ21 fleet, running routes to some 20 domestic cities with the aircraft. It has achieved 8,000 hours of safe flight and transported more than 230,000 passengers since its first ARJ21 took off in June 2016. Chengdu Airlines has also accumulated much experience in personnel training, maintenance, and market development with the plane.

The ARJ21 is China's first regional jetliner, with 78 to 90 seats and a range of 3,700 km. It can fly in alpine and plateau regions and is adaptable to various airport conditions.

Approved by the Civil Aviation Administration of China last March, Genghis Khan Airlines plans to complete its maiden flight this year using an ARJ21 jetliner. The airline is expected to operate 60 air routes linking 40 waypoints in the region over the next five years, Xinhua reported.