BUSINESS Two meetings in five days: what signal is China sending to markets?

Two meetings in five days: what signal is China sending to markets? 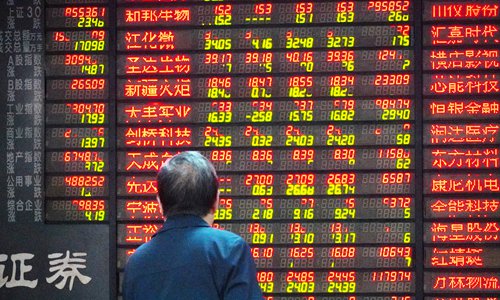 An investor look at the trading board of a stock exchange in Nanjing, capital of East China's Jiangsu Province. (Photo: VCG)

Talking to representatives from private equity firms and venture capital funds at an October 17 meeting, then to those from the social security fund and insurers on Monday, Yi discussed issues on deepening reform in the capital market toward high-quality development.

He emphasized the facilitation of more long-term money into the markets.

The development of the capital market is vital for China's real-economy reforms, but the lackluster performance of stock markets in the Chinese mainland has drawn tough criticism from economists amid the ongoing trade war with the US.

For instance, leading Chinese economist Li Daokui said in June that the US stock market is "a better combatant than the Chinese one on the battlefield of a trade war."

Xi Junyang, a professor at the Shanghai University of Finance and Economics, said the Chinese stock market is dominated by individual investors.

"Not knowing how to invest in the long term, individual investors have over the years gotten into the habit of frequent trading in search of quick returns," Xi told the Global Times.

"The habit is so strong that some institutional investors followed suit," Xi noted.

Analysts said the market structure as it now exists may not offer enough momentum for reform, which includes experiments such as the science and technology innovation board.

In September, the CSRC listed 12 priorities for deepening reform of the country's capital market, and encouraging more medium- and long-term capital to enter the market was among the listed priorities.

A broker at a Beijing-based primary institution, who only gave his surname as Liu, told the Global Times on Wednesday that the meetings underlined the interconnectedness between the primary and secondary markets and the presence of long-term investors in the secondary markets.

"If you have a sound secondary market, you have more room to maneuver when it comes to reform of the primary market," said Liu.

The Chinese stock market had a lackluster day on Wednesday.

Analysts said that increased participation by foreign institutions as a result of reform will help increase the ranks of long-term investors.

On October 11, the CSRC set a clear timetable for allowing full foreign ownership of financial service companies, in line with broader efforts to further open up the financial sector, a key battleground after the opening up of the manufacturing sector.

Foreign ownership limits on fund management firms will end on April 1 next year, while shareholding caps on foreign investment in brokerages will be scrapped from December 1 next year.