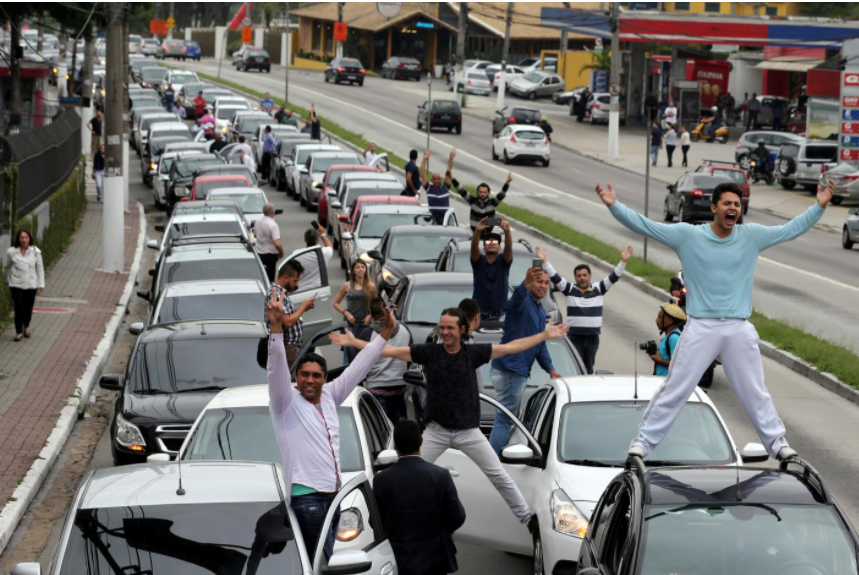 Uber drivers protest against a legislation threatening the company's business model that is to be voted in Brazil's national congress, in Sao Paulo, Brazil. Photo: REUTERS/Paulo Whitaker

The new chief executive of Uber Technologies Inc [UBER.UL] appealed to Brazilian lawmakers in the country’s capital on Tuesday to block elements of a bill he said threatened the ride-hailing app’s business model, calling for more dialogue and sensible regulation.

Dara Khosrowshahi struck a conciliatory tone in an interview published in a Brazilian newspaper, suggesting Uber was more open to finding compromise with local lawmakers, a break in style with his pugnacious predecessor, Travis Kalanick.

“In the past we were a bit aggressive but we have to understand that it’s not just about what we want and reach compromises that work for us and for other countries,” Khosrowshahi told O Estado de S. Paulo.

“This is the case in Brazil: there are ways for regulation to work for both Uber and the government.”

A spokesman for Uber confirmed the accuracy of the quotes published in Portuguese, but was not able to provide recordings or transcripts in English.

Brazil’s Senate was set to vote on Tuesday on legislation that Uber has said would undermine its ability to operate in its third-largest market, underscoring legal threats mounting against the company’s fast-growing foreign operations.

If passed, the bill would go to President Michel Temer for a signature or veto on some or all of the new regulations.

Taxi and Uber drivers lined the esplanade in front of Brazil’s Congress on Tuesday to demonstrate for and against the bill. There were no early signs of the violent clashes that have occasionally marked such protests.

“We are not against regulation. Regulating services like Uber is totally appropriate,” Khosrowshahi told the newspaper, adding that he was pressing Brazilian senators to remove rules that would require Uber drivers to own their cars and be licensed as taxis.

Khosrowshahi took over in August from Uber co-founder Kalanick, assuming the daunting task of mending the company’s public image, repairing frayed investor relations and rebuilding employee morale after a string of crises. [L2N1LG1YP]

Khosrowshahi’s trip to Brazil, first reported by Reuters on Friday, followed a recent visit to London, where authorities had decided not to renew the company’s operating license.

“We had a very constructive dialogue and I think we will be able to resolve their concerns,” he said of the London trip.

Khosrowshahi told Estado that Uber was making security its top priority in 2018 after his teams in Brazil, Mexico and other parts of Latin America raised concerns about the issue.

In February, Reuters reported that a surge in violence against Uber drivers in Brazil last year was forcing executives to rethink the use of cash payments and admit they had underestimated security risks here.