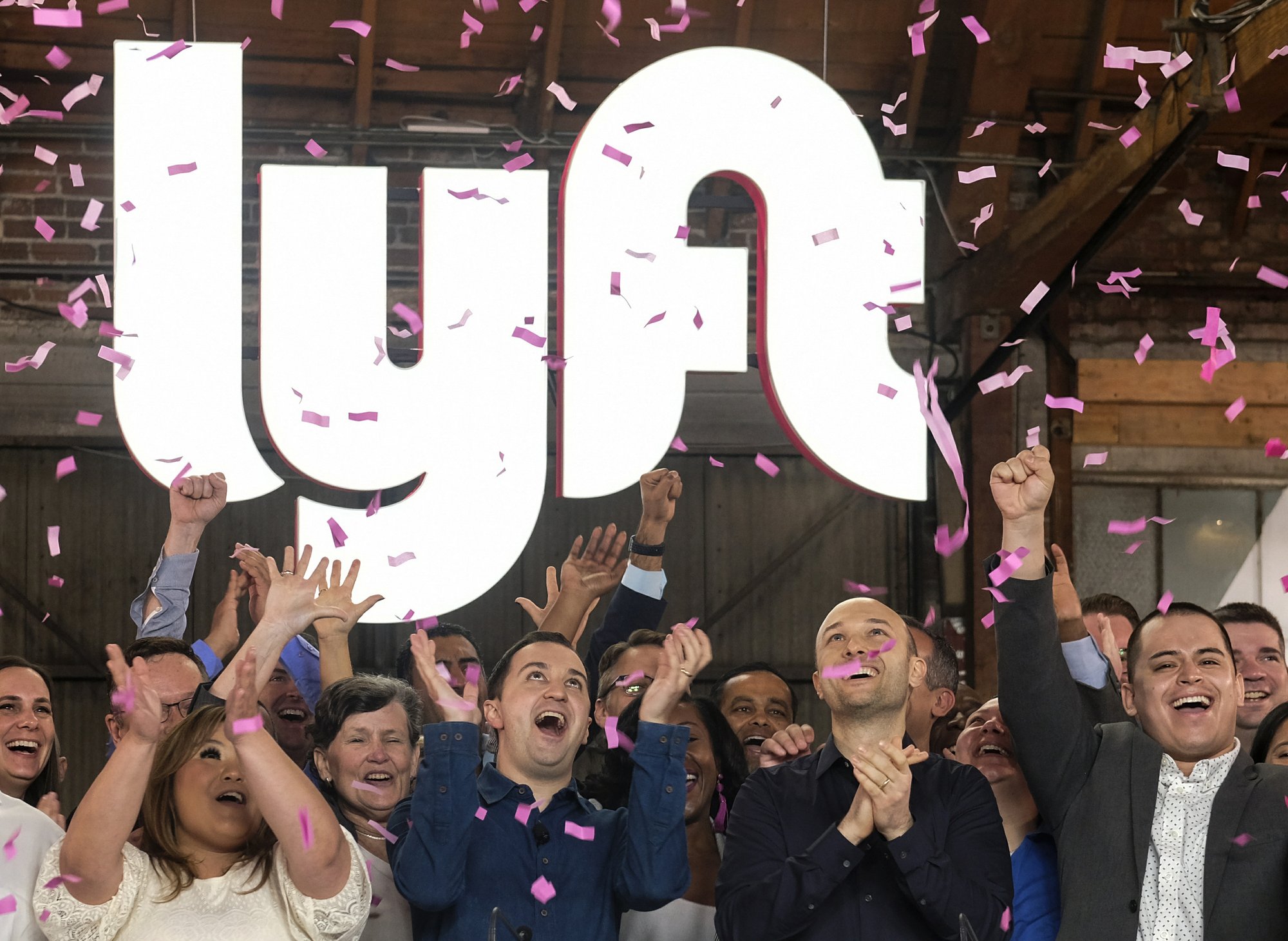 FILE - In this Friday, March 29, 2019 file photo, Lyft co-founders John Zimmer, front second from left, and Logan Green, front second from right, cheer as they as they ring a ceremonial opening bell in Los Angeles, to mark trading on the Nasdaq exchange under the ticker symbol "LYFT." (Photo: AP)

A fare war between Uber and Lyft has led to billions of dollars in losses for both ride-hailing companies as they fight for passengers and drivers.

But in one way it has been good for investors who snatched up the newly public companies’ stock: The losses have scared off the competition, giving the leaders a duopoly in almost every American city.

The two San Francisco companies have already lost a combined $13 billion. And with no clear road to profits ahead, no one else has much of an incentive to mount a challenge using the same model relying on people driving their own cars to pick up passengers that summon them on a smartphone app, said Susan Shaheen, co-director of the Transportation Sustainability Research Center at the University of California, Berkeley.

Even if another rival dared enter the market, it would likely be difficult to raise enough money to pose a viable threat after Uber and Lyft spent the past decade pulling in billions of dollars from venture capitalists. And in the past six weeks, they raised an additional $10.4 billion in their recently completed initial public offerings of stock.

“There’s only a duopoly because both companies have enough capital to compete with each other and no one else does,” said Gartner analyst Michael Ramsey.

It’s likely to remain that way until any of dozens of companies trying to create self-driving cars refines their technology so they can launch a network of robotic taxis that removes human drivers from the equation. That breakthrough could enable them to slash their fares below the prices currently being charged by Uber and Lyft.

Google spin-off Waymo has made no secret of its intention to muscle its way into the ride-hailing market with a fleet of self-driving cars built on technology that it has been working on for the past decade. Waymo launched a ride-hailing service with robotic vans in the Phoenix area five months ago, but only 1,000 people are currently allowed to use it.

Besides being on the leading edge of bringing robotic vehicles to market, Waymo also is backed by more money than Uber and Lyft have combined. Waymo is owned by Google’s parent company, Alphabet Inc., which is sitting on $113 billion in cash.

In its IPO document, Uber listed Waymo as a potential threat along with Tesla, General Motors’ Cruise Automation and Apple. Lyft also cited Waymo and Apple among the companies that could undercut its position as the second largest ride-hailing service.

But most experts believe it will still be many more years before self-driving car technology reaches the point that it can support a large fleet of robotaxis.

Until then, the US duopoly is likely to continue, giving Uber and Lyft the luxury of focusing on growth rather than turning a profit, analysts said. That means ride-hailing fares in the US are likely to remain below the actual cost of providing the service, a boon for consumers.

“These subsidies will continue as long as each company believes they will be gaining new customers by having a lower price,” says Alejandro Ortiz, principal analyst at SharesPost. “The story now is growth, but growth is expensive.”

Eventually, though, investor pressure will mount on the companies to make money, and doing that almost certainly will require higher prices for their rides.

On the floor of the New York Stock Exchange Friday, Uber CEO Dara Khosrowshahi hinted that it will be three to five years before the company pivots to a focus on profit. That timetable hasn’t been well received on Wall Street so far. Lyft’s stock has fallen 29% below its IPO price of six weeks ago, and Uber flopped in its stock market debut Friday as its shares slipped by almost 8% percent.

Markets with only one or two dominant players often create situations for companies to abuse their power or attempt to stifle competition. Regulators and legislators around the world argue that’s already happened in many corners of technology, with Facebook having a seemingly impenetrable stronghold in social networking, Google dominating search and Amazon controlling a wide swath of online shopping.

That has stirred calls to break up some of the companies, especially Facebook, whose own co-founder, Chris Hughes, recently argued his former company has become too powerful for society’s good.

For now, Uber and Lyft have been drawing upon all the money that they have raised from investors to keep prices relatively low, creating a barrier for smaller-scale competitors without the capital to sustain massive losses.

Take Austin, Texas, for instance. In 2016, Uber and Lyft pulled out of the city after voters approved regulations on ride-hailing companies, including fingerprint background checks for drivers. Four competitors stepped in to give rides in tech-savvy Austin, including two local companies. But the following year, Texas legislators passed a looser state law that superseded Austin’s, and Uber and Lyft came back.

Shortly after their return, three of the competitors, Boston-based Fasten, locally owned GetMe and Phoenix-based Fare stopped operations, and the remaining one, nonprofit RideAustin, lost thousands of its riders.

“It was a matter of a couple months and those three companies were gone,” said Chris Simek, an associate research scientist with the Texas A&M University Transportation Institute, who co-authored a study of Uber and Lyft’s impact on ride-hailing in Austin.

Uber hasn’t been as successful thwarting competition outside the US It has waved a white flag during the past three years in Russia , China and parts of Southeast Asia by selling its services in those parts of the world to stronger rivals.

Lyft has not expanded outside North America yet, so it faces few other competitors besides Uber in the US

Via has managed to carve out a niche by running a pooled ride system in New York, Washington, DC, and Chicago, and it contracts to provide transit in about 70 cities worldwide. It competes most directly in New York, where Uber and Lyft also offer pooled services that transport multiple riders.

Via specializes in carrying up to six passengers at a time, largely in vans, and is growing because it can do a more efficient job carrying more people, said spokeswoman Gabrielle McCaig. Still, the company is losing money as it invests in growing the business, she said.

And so it remains, at least for now, that Uber and Lyft will occupy the ride-hailing industry’s driver’s seat.

“It is hard to see a third or fourth player coming in at this point,” said DA Davidson analyst Tom White. “I think we are looking at a duopoly in North America.”