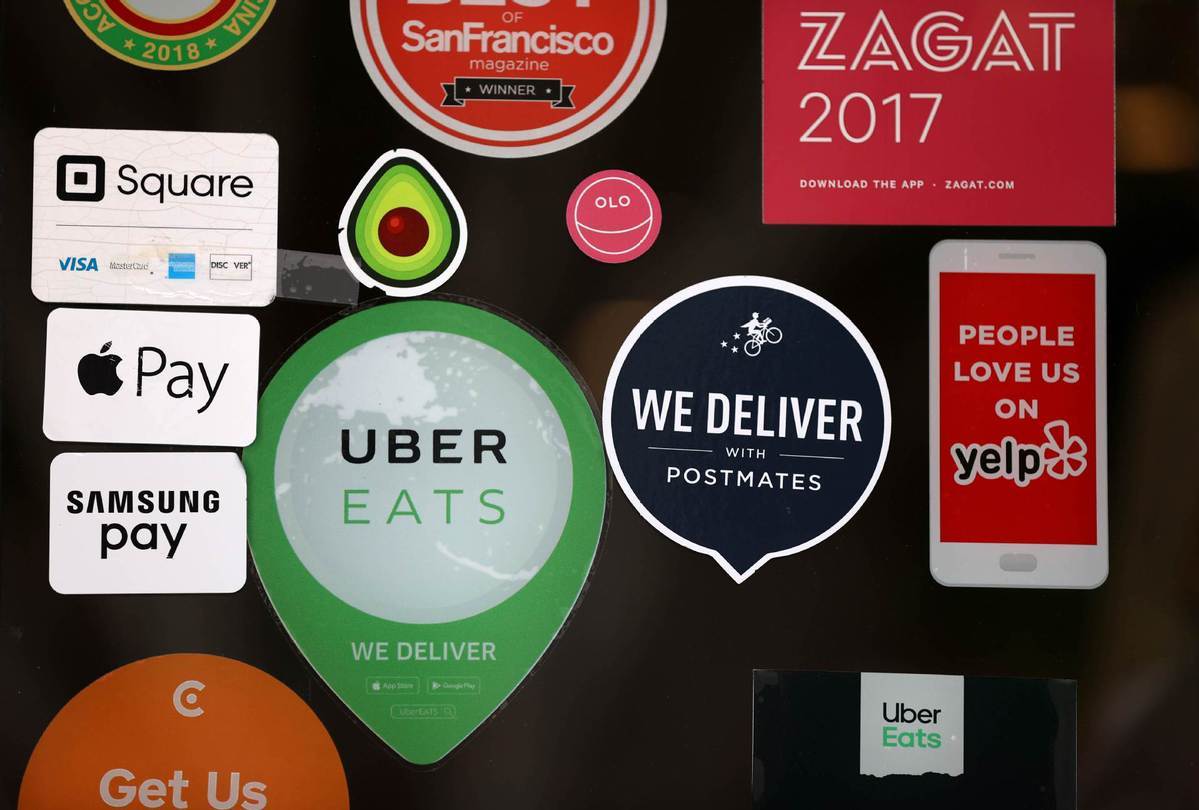 A Postmates sticker is displayed next to an Uber Eats sticker on the window of a restaurant on July 6, 2020 in San Francisco, California. (Photo: Agencies)

Uber believes its $2.65 billion acquisition of rival Postmates will boost its food home delivery earnings and make the company profitable by next year.

The all-stock deal is vital to improving Uber's prospects after the COVID-19 pandemic slashed demand for its core ride-hailing business.

"We're very confident we're going to get to profitability next year, and we have enough of a diversified portfolio to make that statement with quite a bit of confidence," said Dara Khosrowshahi, Uber's CEO, on CNBC.

In January, Uber said it expected to show a profit based on earnings before interest, depreciation and amortization by the fourth quarter of 2020, but it withdrew the estimate in May after shutdowns intended to curb the spread of the novel coronavirus upended the US economy.

The deal followed Uber's unsuccessful bid to acquire Grubhub, which was snapped up in June by Just Eat Takeaway, a major Amsterdam-based company in the field, for $7.3 billion.

Dan Ives, an analyst at Los Angeles-based Wedbush Securities, said Uber's acquisition of Postmates was a "smart strategic fit" given that the combined companies have about 33 percent of the home delivery market — well behind sector leader DoorDash's 44 percent.

"Clearly, this is an aggressive move by Uber to take out a competitor and further consolidate its market position," Ives said in a research report. "Especially as the COVID-19 pandemic continues to shift more of a focus to deliveries vs. ride-sharing in the near term."

There are low barriers to entry in the home delivery sector. The once highly fragmented market continues to consolidate as companies seek to build market share and develop clout to better take on the competition.

Postmates, an early entry into the home delivery field, has performed well in a few cities such as Los Angeles and Miami, but grabbed only 10 percent of all food deliveries in the first quarter of this year, Ives said.

The acquisition means that about 98 percent of the US food delivery market will be controlled by Uber, GrubHub and privately held DoorDash, said Michael Graham, an analyst at New York-based Canaccord Genuity, in a research report.

"We applaud this move as it will further consolidate the online food delivery market which could lead to pricing stabilization in the long-run," Morningstar analyst Ali Mogharabi said in a research report.

"With Postmates, Uber will increase its lead over Grubhub as the number two player in the space."

BTIG, a New York investment bank, estimates that about 25 percent of Uber's bookings come from commuters - a drag on earnings during the coronavirus pandemic as many have lost their jobs or work from home.

"Our take is that (Wall) Street under-estimated exposure to commute rides and the fact that workers in key markets aren't coming back anytime soon," said Jake Fuller, an analyst at BTIG, in a research report.

Uber's CEO sees the acquisition as part of a two-pronged plan to build market share in both its ride-hailing and home delivery sectors.

"Uber and Postmates have long shared a belief that platforms like ours can power much more than just food delivery - they can be a hugely important part of local commerce and communities, all the more important during crises like COVID-19," Khosrowshahi said in a statement.

He said the acquisition would benefit consumers and merchants.

"As more people and more restaurants have come to use our services, Q2 bookings on Uber Eats are up more than 100% year on year. We're thrilled to welcome Postmates to the Uber family as we innovate together to deliver better experiences for consumers, delivery people, and merchants across the country," Khosrowshahi said in a statement.

On a conference call with reporters, Khosrowshahi described Postmates as a "scrappy brand" that's established strong relationships with local restaurants.

Uber's CEO said Postmates has established itself as a strong competitor in deliveries from pharmacies and stores, strengthening Uber's efforts to become the Amazon of transportation and delivery.

But some analysts remain skeptical because the food home delivery market has yet to establish itself as a consistent moneymaker, similar to the launch of ride hailing when Uber and Lyft offered steep discounts to riders and larger payouts to attract drivers.