British no-frills airline EasyJet on Tuesday posted the group's first ever annual pre-tax loss as a result of the devastating impact of the coronavirus pandemic on global air travel. 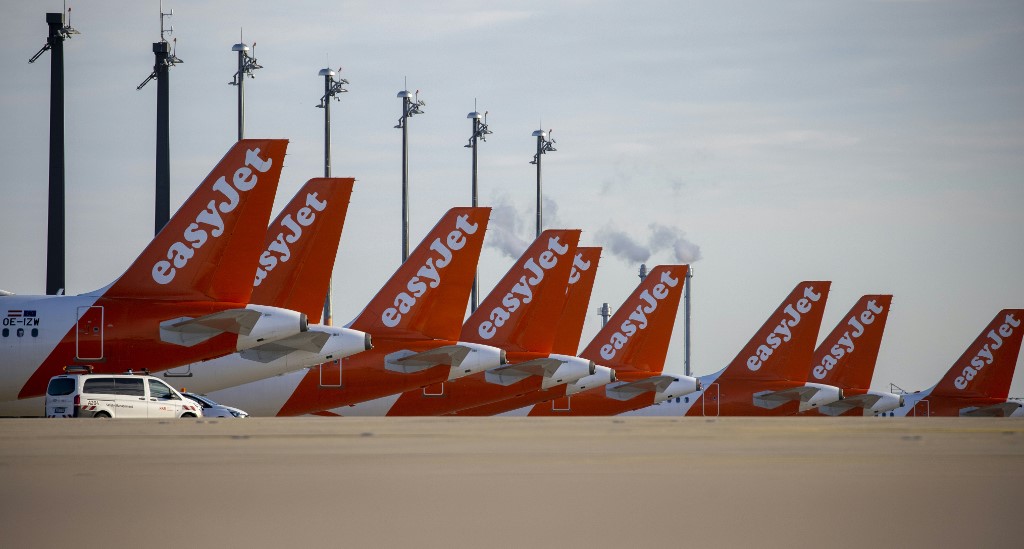 In this file photo taken on November 4, 2020 Easyjet planes are seen parked at the "Berlin Brandenburg Airport Willy Brandt" in Schoenefeld, southeast of Berlin. (Photo: AFP)

EasyJet said it suffered a pre-tax loss of £1.27 billion ($1.7 billion, 1.4 billion euros) in its year to the end of September, marking the first loss in its 25-year history.

That compared with a year-earlier pre-tax profit of £430 million, the group added in a results statement.

Passenger numbers halved to 48.1 million as Covid-19 travel restrictions slammed demand and revenues slumping by a similar proportion to stand at £3.0 billion.

The airline, which is based in Luton north of London, flagged last month that it was on course to fly into the red for the first time.

EasyJet added Tuesday that it plans to fly no more than 20 percent of its usual capacity during the first quarter as part of ongoing winter cutbacks, and gave no outlook guidance due to short-term uncertainty.

"I am immensely proud of the performance of the EasyJet team in facing the challenges of 2020. We responded robustly and decisively, minimising losses, reducing cash burn and launching the largest... restructuring programme in our history -- all while raising more than £3.1 billion in liquidity to date," said Chief Executive Johan Lundgren.

He also cheered "welcome news" on a possible Covid-19 vaccine that could potentially herald a long-term return to normality.

"While we expect to fly no more than 20 percent of planned capacity for the first quarter of 2021, maintaining our disciplined approach to cash generative flying over the winter, we retain the flexibility to rapidly ramp up when demand returns.

"We know our customers want to fly with us and underlying demand is strong," continued Lundgren.

"And last week we saw the welcome news about a possible imminent vaccine roll out."

Lundgren added that the airline was now "well positioned and expecting to bounce back strongly".

The carrier grounded its entire fleet on March 30 as Britain went into a lockdown, returning to the skies with only a very limited schedule in the middle of June.

As a result, EasyJet is axing up to 4,500 jobs, or almost one third of its staff, as it seeks to slash costs in order to survive the crisis -- mirroring moves by airlines worldwide.

"During the 11-week grounding in spring/summer and the restart, EasyJet took quick and decisive actions to cut operating costs and capital expenditure, to maximise liquidity and to develop processes to manage our return to flying," the group said.

"EasyJet remains extremely disciplined and since the grounding has focused on flying which generates a positive contribution.

"During the first half of the year Easy Jet delivered strong underlying trading," it said in Tuesday's statement.