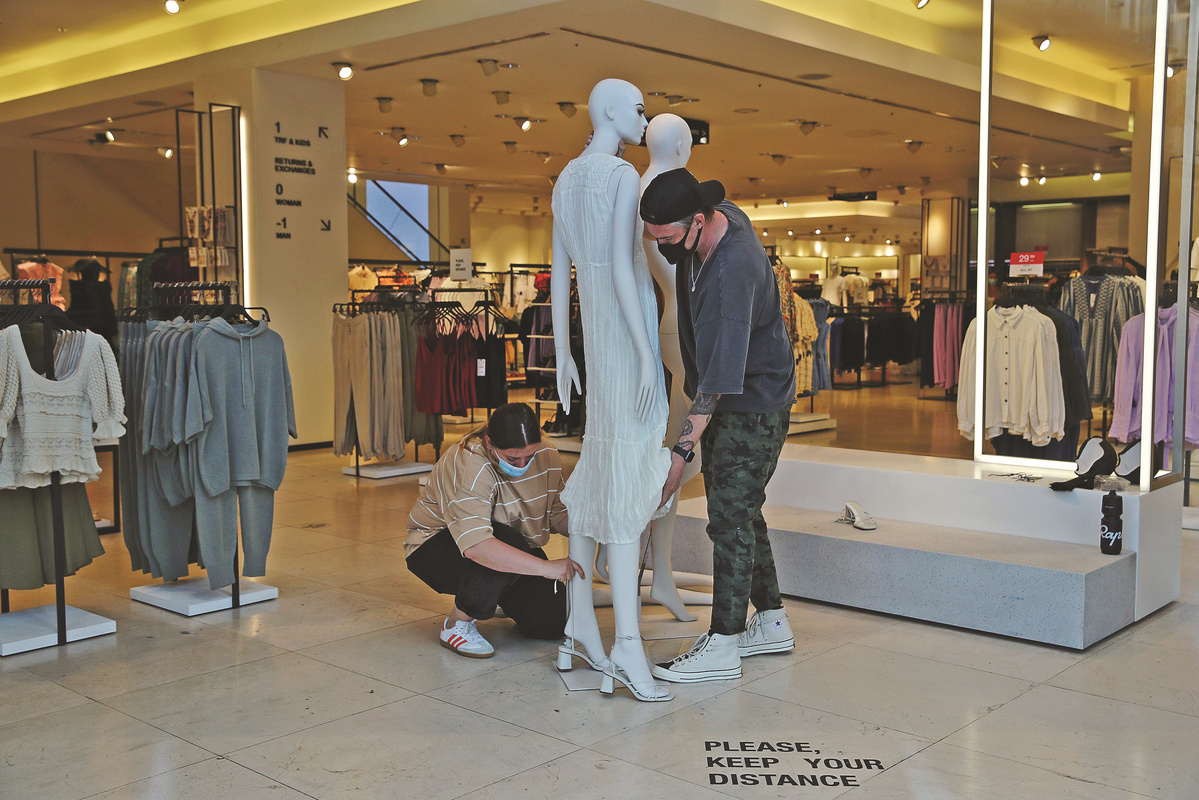 Workers adjust a mannequin at a ZARA store as shops in Britain prepare to reopen on Monday. [Photo/Agencies]

Britain's Chancellor of the Exchequer Rishi Sunak has said people should feel confident that it is safe to go shopping when shops reopen in England on Monday, but warned of economic "hardship ahead".

He said the scale of the economic impact from the novel coronavirus pandemic lockdown had required "unconventional responses", pointing to the unprecedented government job retention program.

"I think, primarily, we need to reopen our economy safely and slowly, and that's the most important thing, to try and safeguard as many of those jobs as possible," he told the BBC's Andrew Marr Show.

"But then as I look forward, acknowledge that there is going to be hardship ahead. People are going to lose their jobs."

His comments came after British Prime Minister Boris Johnson ordered a comprehensive review of the two-meter social-distancing rule amid calls it should be scrapped to allow businesses such as restaurants and pubs to reopen sustainably.

There have been warnings that any maintaining of the rule, along with a closing of the furlough program, could be a "horrendous" situation for the hospitality sector, with the prime minister facing pressure from some of his own MPs to reassess the situation.

The National Health Service last week revealed data from the first full week of the new contact-tracing program that showed one third of those who have tested positive for coronavirus in England have not provided details of people they have been close to and may have infected.

The chief of the NHS Test and Trace service, Dido Harding, said she was encouraged by the public's willingness to cooperate, but the program would need to do better.

Face coverings on public transport will be compulsory in England from Monday in line with the latest World Health Organization advice.

The WHO says face coverings could provide "a barrier for potentially infectious droplets" in areas where "physical distancing of at least one meter is not possible".

The new rules coincide with the return to class of some secondary school pupils, and the government is mounting a fresh push to have more primary school children back in the classroom ahead of the summer break. With most children in England set to remain at home until September, ministers have been accused of putting retail before pupils' education.

A Downing Street source said Johnson was "acutely aware" of the impact the extended closure was having on pupils and was working with Education Secretary Gavin Williamson on a major "catch-up" plan.

Students completing GCSE and A level exams next year could be allowed to complete "open-book" examinations that would allow access to text books and notes to tackle questions, according to the Financial Times.

Exams regulator Ofqual begins a formal consultation in the coming weeks on how secondary schools can fairly assess students in 2021.

Meanwhile, Britain's fruit and vegetable growers have said they are struggling with labor costs after the coronavirus lockdown prevented the arrival of the usual seasonal workforce from Eastern Europe.

The government's "Pick for Britain" program was launched in April to meet a shortage of European agricultural workers who are unable to travel to the UK because of the coronavirus.

Every year around 80,000 seasonal workers pick fruit and vegetables on British farms, but the National Farmers Union has said the sector would still need around half that amount to plug the shortfall in the workforce due to COVID-19. Labor can account for as much as 70 percent of a farm's costs, the union said.

Speaking to the Financial Times, Angus Davison, chairman of the Herefordshire-based berry growing group Haygrove said higher recruitment and labor costs were not matched by any increase in prices paid for their produce.

"This is not a very profitable sector any more and we have had cost increases that are significant this year," Davison said.