BUSINESS UK economy shrinks with worst yet to come

UK economy shrinks with worst yet to come 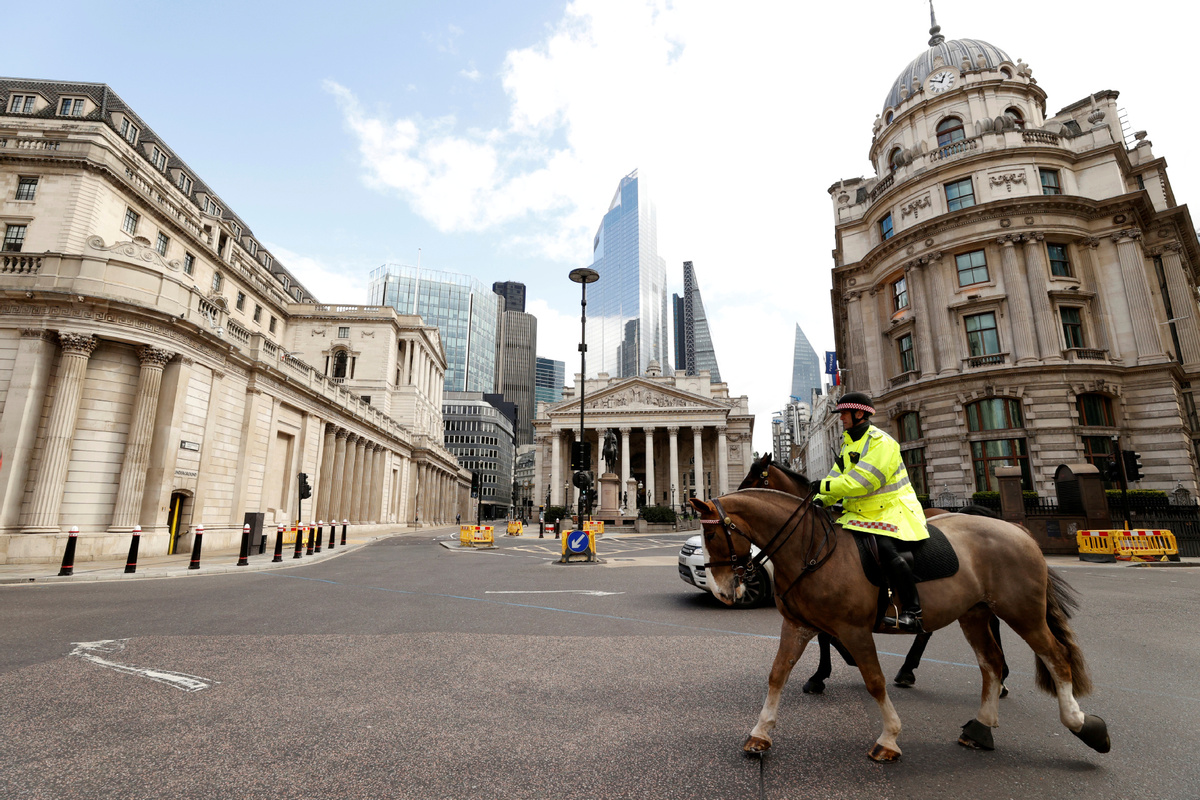 Police on horses patrol outside the Bank of England as the spread of the coronavirus disease (COVID-19) continues, London, Britain, March 31, 2020. (Photo: Agencies)

The novel coronavirus crisis has caused the United Kingdom's economy to shrink by 2 percent in the first three months of this year, and indications are that the worst is yet to come.

Office for National Statistics data released on Wednesday shows the government ordered shutdown of much of the country on March 23 brought economic contraction at its fastest rate since the height of the financial crisis in 2008.

The monthly drop in gross domestic product, or GDP, was felt in almost all sectors and was the largest since comparable records began in 1997. In March alone, Britain's economy shrank by a record 5.8 percent as the crisis escalated.

April's data is likely to be far worse for the nation's GDP growth as almost all shops except supermarkets and pharmacies remain shut in the novel coronavirus lockdown.

According to the British Retail Consortium, retail spending plunged by nearly a fifth in April, and a broader measure of consumer spending tumbled by more than a third, its surveys showed.

Barclaycard said credit and debit card spending plunged by 36.5 percent compared with a year earlier as spending on travel, pubs and restaurants collapsed.

According to Barclaycard data to April 24, spending at pubs and restaurants had fallen by 97 percent, but supermarket sales were up by 14 percent and online spending on home improvements increased by 27 percent.

Last week, the Bank of England said it was plausible that both consumer spending and broader economic output would fall by around a quarter during the three months to June, and that output for 2020 could suffer its biggest hit in more than 300 years.

Chancellor of the Exchequer Rishi Sunak told the BBC on Wednesday that just "a few days of impact from the virus" in March pushed the economy into decline.

Sunak said: "It is now very likely that the UK economy will face a significant recession this year, and we're already in the middle of that as we speak."

Speaking at Wednesday's government news briefing, Robert Jenrick, the housing secretary, set out a plan to restart the housing and construction market－after curbs on estate agents were lifted in England.

Jenrick said the government is planning a "first homes program "for later this year that will offer a 30 percent discount for key workers. He added that he wants construction of homes to be "up and running" and is "announcing further steps for safe house building", and that there will be more flexible working hours on construction sites to allow this.

He said: "This is the most comprehensive re-starting of an industry in the first phase of our roadmap (out of lockdown). History tells us that in every economic recovery in modern British economic life, the housing market has been key to recovery and revival."

It comes as all five key manufacturing sectors in the UK warned the government that measures to impose a 14-day quarantine on travelers arriving from overseas could disrupt production, leading to supply shortages and further job losses.

The Financial Times reported that the automotive, aviation, chemical, food and pharmaceutical industries all warned that exemptions would be needed "to ensure the smooth operation and safety of their factories", many of which depend on specialist "fly in, fly out" engineers to service production lines.

All but essential international travel has been discouraged since March 17, and domestic trips have been warned against since the nationwide lockdown began six days later. Restrictions on air travel have also been enforced across the European Union.

Another 494 people who have tested positive for COVID-19 in the UK have died, taking the total to 33,186. Some lockdown restrictions were eased in England on Wednesday, but commuters in London told the BBC that trains and buses were still too busy to observe social distancing rules.

And Prime Minister Boris Johnson has announced another 600 million pounds ($740 million) for infection control in care homes. Speaking in Parliament on Wednesday, the prime minister said there had been a "terrible epidemic" in care homes and that the final death rate figures in the UK would be "stark and deeply horrifying".

Meanwhile, police in the UK have started an investigation into the death from the virus of a railway ticket office worker who was spat at while on duty at Victoria station in central London.

Belly Mujinga, 47, was on the concourse of the station in March when a member of the public who said he had the virus spat and coughed at her and a colleague. Within days, both women had fallen ill.

The Transport Salaried Staffs Association trade union said Mujinga, who had underlying respiratory problems, was admitted to Barnet Hospital in north London and put on a ventilator but died on April 5.

Manuel Cortes, the association's general secretary, said: "There are serious questions about her death－it wasn't inevitable. Anyone who is vulnerable should remain at home, and home working should be the default wherever possible."

The prime minister said the death of Mujinga was "utterly appalling" while Labour leader Keir Starmer said the ticketing officer had died in "awful circumstances".