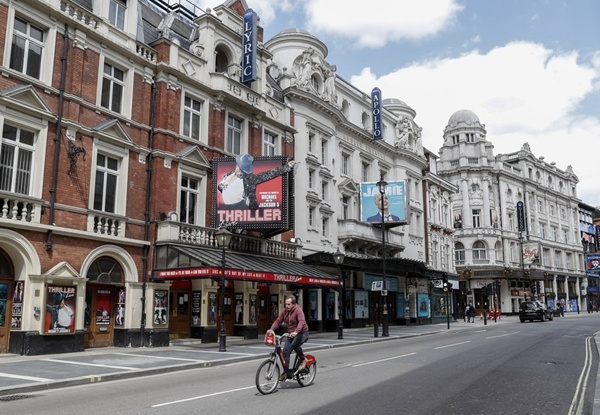 A man cycles past closed theatres in the West End, in London, Britain on May 12, 2020. At least 5,000 theater workers in Britain, more than half of them in London, have lost their jobs during the COVID-19 shutdown, a trade union report has revealed. (Photo: Xinhua)

"After a volatile autumn, the UK jobs market stabilised through the winter, helped of course by the extended furlough scheme," said Smith.

Ruth Gregory, an economist at the London-based economic analysis firm Capital Economics, said the decrease of jobless rate highlighted "once again the extent to which the (British) government's job furlough scheme has protected jobs during the pandemic."

"We still expect the unemployment rate to rise further to a peak of 6.0 percent by early 2022, but that would be a much better result than most feared only a few months ago," Gregory added.

Suren Thiru, head of economics at the British Chambers of Commerce, echoed the prediction of rising jobless rate ahead.

"With many firms struggling with the damage done to their cash-flow by a year of COVID restrictions, unemployment is likely to remain on an upward trajectory until well beyond a full reopening of the economy," said Thiru.

On Feb. 22, British Prime Minister Boris Johnson announced his long-anticipated "roadmap" exiting the lockdown. The March 8 reopening of schools was first part of the four-step plan which is expected to see all legal restrictions in England being removed by mid-June.

Other parts of Britain, including Wales and Norther Ireland, have also unveiled plans to ease the restrictions.

Experts have warned Britain is "still not out of the woods" amid concerns over new variants and the risks of the public breaching restriction rules.