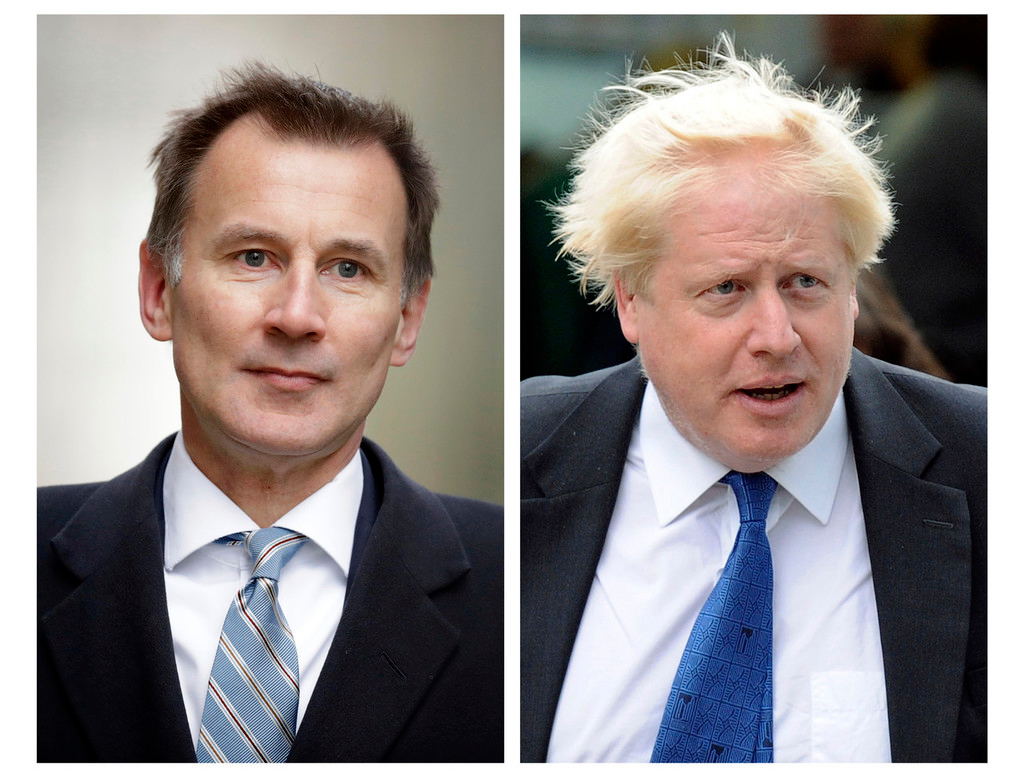 This two-photo combo image shows Jeremy Hunt, left, and Boris Johnson, right, who have both backed "freeports" on the east coast of the country. (Photo: IC)

Britain's Conservative Party leadership rivals Boris Johnson and Jeremy Hunt have both backed "freeports" on the east coast of the country, bringing accusations they seek to turn the United Kingdom into a haven for tax evaders and money launderers.

Freeports were heavily criticized by a European Parliament report last year for facilitating "illegal activity". They have been springing up around the world as more investors store and trade physical assets. They are considered independent for customs purposes, charging no taxes or tariffs on imports.

Liberal Democrat member of Parliament Ed Davey told the Guardian: "Looking to freeports for economic salvation once they've pushed us off the cliff shows the desperation of Boris Johnson, Jeremy Hunt and Tory Brexiteers.

"The British economy is fundamentally sound as part of the EU, but their vision means the UK would become one of the world's most opaque, unregulated, and easily manipulated economies.

"We should be leading the world in business transparency, not promoting structures that have the potential to facilitate money laundering."

Johnson was understood to be backing longstanding proposals for a freeport on Teesside, while his leadership team has indicated that giving Aberdeen or Peterhead the same status after Brexit could create 17,500 jobs.

Hunt, asked about the policy, had said he would be happy to consider Johnson's proposals if he became prime minister.

Alex Cobham, the chief executive of the Tax Justice Network, said there were wider implications than the impact on local economies. He said: "Freeports have repeatedly been shown to facilitate large scale criminality, including tax abuse.

"The establishment of a freeport should not be countenanced without, at a minimum, requiring far-reaching public registers of those using them and the assets involved."

The European Parliament's report warned freeports were "conducive to secrecy" and pointed to the role they played in revelations contained in the Panama Papers leaks.

Meanwhile, the UK Chancellor of the Exchequer Philip Hammond has criticized both Hunt and Johnson, saying they risked "throwing away" the Conservative Party's reputation for fiscal responsibility with their plans to spend billions of pounds.

The Institute for Fiscal Studies, or IFS, a think tank, said that the leadership candidates were making "extraordinary" promises.

Their pledges include tax cuts and tuition fee write-offs, as well as more pragmatic proposals such as money to help industries cope with a no-deal Brexit.

The chancellor said the contenders were failing to be honest about the consequences of their spending commitments and the burden they would place on public finances with their approach to a no-deal Brexit, and that they had entered a "bidding war".

He said the 25 billion pounds ($31.5 billion) worth of "fiscal firepower" that is currently being held in reserve would be needed entirely to counteract the effects of departing the EU without a deal.

Hammond said: "If we're not careful all we end up doing is borrowing more, spending more on interest instead of on our schools and our hospitals and our police and delivering a bigger burden of debt to our children and our grandchildren."