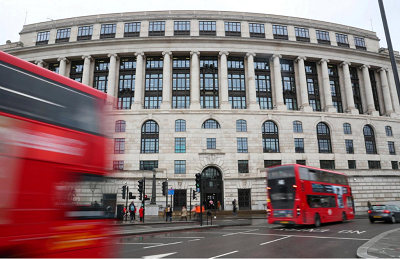 Traffic and people pass by the front of the Unilever building in central London, Britain, March 15, 2018. (File photo: Reuters)

The maker of Dove soap and Ben & Jerry’s ice cream also expressed confidence that shareholders will support its decision to change its corporate structure and have its main headquarters in the Netherlands.

Chief Financial Officer Graeme Pitkethly told Reuters that even though a small proportion of UK shareholders might be affected if Unilever shares were no longer in the blue-chip FTSE 100 index .FTSE, most shareholders understand the reasoning for the decision and are supportive.

Shareholders will vote on the move later this year.

Unilever undertook a deep review of its business and structure last year after fending off an unwanted $143 billion (£100.6 billion) takeover offer from Kraft-Heinz (KHC.O). The decision to sell its struggling spreads business also came from that review.

In light of the proceeds from the sale of spreads to private equity firm KKR, Unilever on Thursday announced a new share buyback programme, for up to 6 billion euros (£5.2 billion) worth of stock, to start next month.

It also reported underlying sales growth of 3.4 percent, meeting an analysts’ consensus supplied by the company.

Almost all of Unilever’s sales growth came from selling more products, with only a 0.1 percent boost from higher pricing. This may concern the market, as a recent rise in oil prices and costs for transportation could eat into margins if not passed on to customers.

The chief financial officer said the balance of price and volume will improve in the second half of year.

A sharp slowdown in pricing growth in last year’s fourth quarter weighed on Unilever’s shares despite overall sales performance that was its best in six quarters.

Consumer packaged goods companies are all under pressure to boost performance, as sales have slowed due to changing consumer tastes and shopping habits and a slew of upstart rivals.

The company stood by its forecast for 2018 sales growth of 3 to 5 percent.