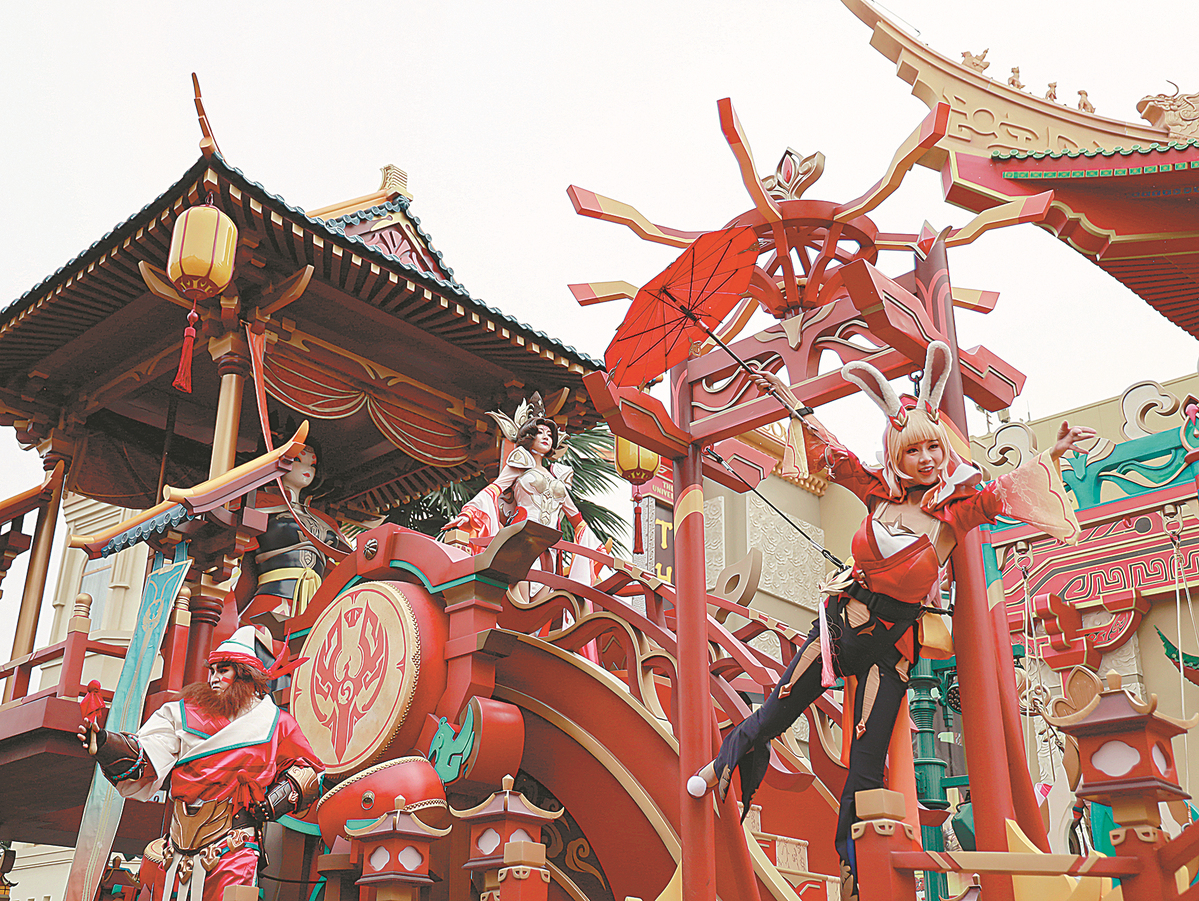 Performers dressed as video game characters on a parade float at Universal Beijing Resort in April. The resort announced it is to reopen its theme park this weekend. [Photo by Wang Haochen/for China Daily]

The resort in Tongzhou district announced its reopening on Wednesday after a nearly two-month closure due to the pandemic.

According to a statement on its website, the resort plans to gradually resume operations while strictly limiting visitor capacity and fully implementing pandemic control and prevention measures.

The theme park, the most renowned attraction in the resort, reopened on June 25, but with shortened opening hours, the resort said.

Universal CityWalk Beijing and the Universal Studios Grand Hotel resumed business on June 24, while the NUO Resort Hotel is scheduled to reopen its doors on July 1.

In the initial stage, the resort will continue to suspend some catering services and entertainment facilities. These will resume at a later date, depending on the pandemic and related requirements.

All visitors to the resort are required to make reservations online, undergo body temperature checks, and present a green health QR code as well as a negative nucleic acid test result taken within 72 hours prior to entry, according to the statement.

On June 22, the platform reported a 40 percent surge in daily searches for hotels near the resort.

Tongzhou's hospitality revenue soared 122.6 percent year-on-year in 2021 thanks to the resort which opened in September, the district authorities said at a conference in February.

"More than surrounding areas, such a world-class resort will benefit the whole city's tourism," Huang added.

Zhang Zhining, a representative from the research institute affiliated with online travel agency Ctrip, said summer is a traditional peak season for tourism as children and students will start their two-month vacation in early July.

With the latest COVID-19 resurgence under control, the resort is predicted to attract tourists throughout summer including those from the neighboring city of Tianjin and distant regions, Zhang said, adding it will drive a further rebound in the city's overall tourism.

The most-searched scenic spot was Universal Beijing Resort, followed by the Forbidden City, Beijing Wildlife Zoo and Beijing Zoo, according to statistics from Qunar.

By Wednesday, about 70 percent of luxury hotels in the city had resumed operations, and more than 80 percent of them were offering dine-in services, according to Ctrip.