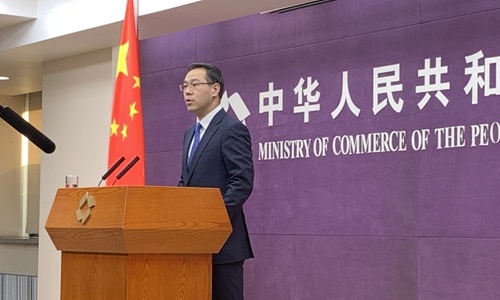 Which enterprises will be put on China's unreliable entity list, which has been viewed by some as a measure by Beijing to counter the US crackdown on Chinese companies, depends on the behavior of the enterprises themselves, the Ministry of Commerce (MOFCOM) said on Thursday.

"There is no preset list of companies for the unreliable entity list, and the list does not target specific countries or enterprises," Gao Feng, a MOFCOM spokesperson, told the Global Times at a press briefing on Thursday.

The ministry unveiled the provisions of the list on Saturday, detailing the rules that could lead to severe penalties against foreign entities and individuals who undermine China's national interests and Chinese companies' legitimate rights.

When asked about which foreign entities would be put on the list, Gao said that there is not a preset schedule or company list, but "which enterprises will be included in the unreliable entity list depends on the behavior of the enterprises themselves."

According to the provisions released on Saturday, foreign entities added to the list could be restricted or prohibited from engaging in China-related import and export activities as well as investment in China, and relevant employees of these entities could face restrictions or bans on entering China.

Even through MOFCOM emphasized that the list is not intended to cover any specific country or company, it is widely perceived as China's countermeasure to the US, as many Chinese companies including Huawei have been severely cracked down by Washington, citing concerns on national security and US interests.

Since the announcement of the provisions, many foreign companies have apparently worried about their operations related to China, as some media raised questions as to whether the list could affect foreign investors' confidence in China.

But Gao emphasized that China's position of deepening reform, opening wider to the outside world, and firmly protecting the legitimate rights and interests of all kinds of market entities, will not change, and there is absolutely no need for honest and law-abiding foreign entities to worry.

"The world is now experiencing tremendous downward pressure, which has seriously affected global cross-border investment. Despite this, China's absorption of foreign investment and outbound investment has maintained an overall balance," Gao said.

A recent survey released by the US-China Business Council showed that 83 percent of the companies surveyed regard China as one of their most important markets in the world.

"This fully reflects the confidence of foreign investors in the Chinese market. China will unswervingly open wider to the outside world, improve the business environment and share China's development opportunities with investors from other countries," Gao added.