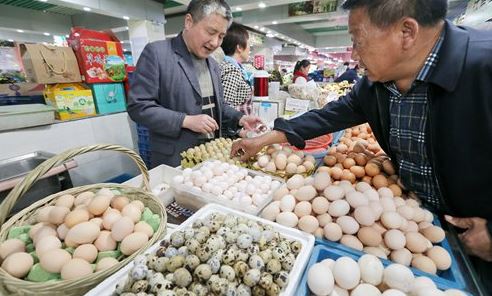 China on Thursday reported upbeat data for consumer inflation and wholesale prices for April, adding to a signs of a resilient economy, despite external and internal pressure.The Consumer Price Index (CPI) grew 2.5 percent from a year earlier, 0.2 percentage points faster than in March, according to data from the National Bureau of Statistics (NBS).That was largely in line with market expectations and should dispel risks of inflation in the world's second-largest economy for the moment, analysts said."So far, I don't think there are any risks of inflation," Liu Xuezhi, an economist at Bank of Communications, told the Global Times on Thursday, noting that such CPI rise had been "moderate."Liu also said higher food prices, particularly for pork, were behind the rise in the CPI.Food prices increased by 6.1 percent year-on-year in the month, while pork prices rose 14.4 percent because of an outbreak of African swine fever in some areas in recent months, according to the NBS.  Pork prices drive a rise of 0.31 percentage points in the CPI growth.Liu said that evident inflation risks are nowhere to be found in China and the relatively stable CPI also left room for further policy adjustment. "It creates a good environment for policymaking, as inflation risks can often are a restricting factor for easing monetary policy," Liu told the Global Times. The producer price index (PPI) posted a better-than-expected growth rate of 0.9 percent year-on-year in April, up 0.5 percentage points from March, the NBS said. The rise in the PPI highlighted improvements in both industrial demand and manufacturing, according to Liu."As price increases at the factory end were higher than at the purchase end, the cost pressure on business operations is expected to be relieved to a certain degree, which is conducive to the operations of the real economy," Liu said.Amid rising downward pressure, Chinese policymakers have launched policy initiatives to stabilize growth, including massive stimulus and huge tax and fee cuts. As a result, rising signs suggest that the world's second-largest economy has shown signs of a robust recovery.