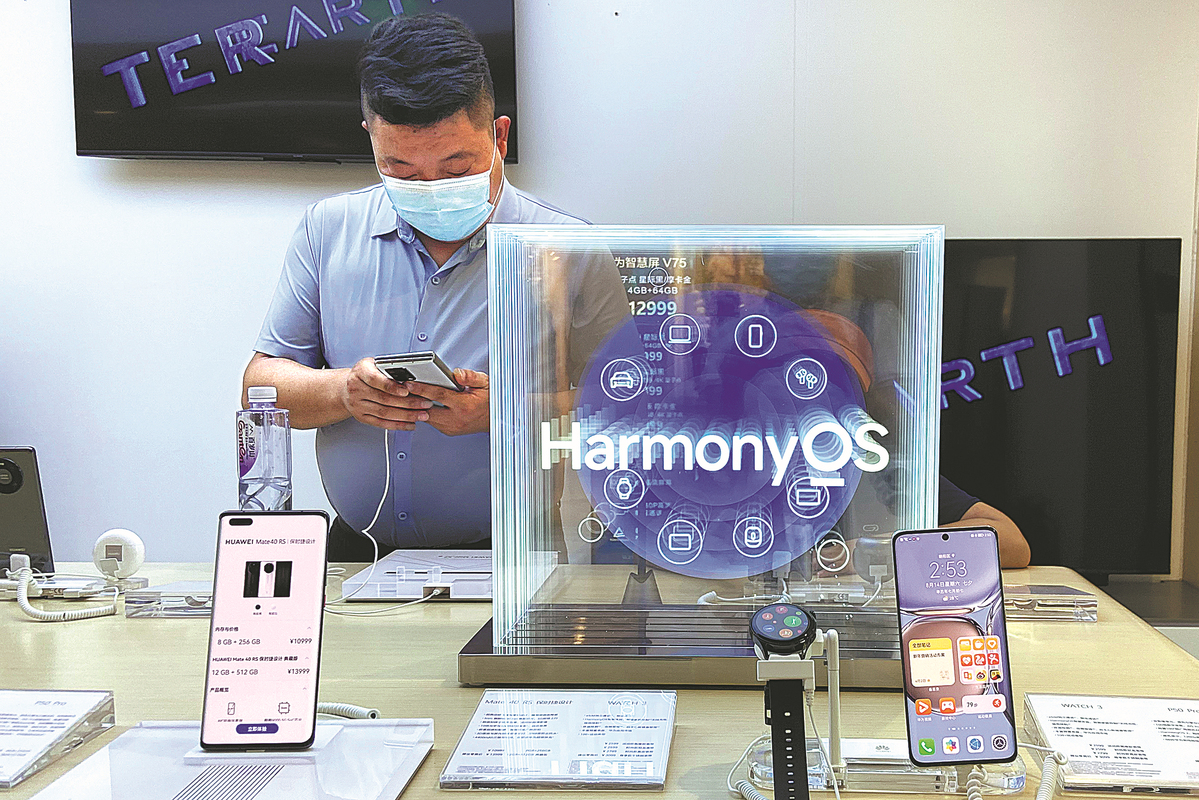 A shopper tries out Huawei's HarmonyOS products at a store in Beijing. [Photo by Mao Xuqian/For China Daily]

Huawei Technologies Co's self-developed operating system HarmonyOS is expected to see wider application in China, as it made progress in optimizing the system's performance, but more efforts are needed to build a robust software ecosystem for it, experts said on Thursday.

Their comments came after Huawei launched an updated version of its proprietary operating system HarmonyOS 3 on Wednesday night, as part of its broader push to counter the US government restrictions.

Xiang Ligang, director-general of the Information Consumption Alliance, a telecom industry association, said HarmonyOS is showing a positive development trend, and large-scale upgrades have also been carried out for older Huawei models, which reflects the company's innovation capacity.

"For the survival of an OS, it is crucial to see how consumers are responding to it. Though doubts exist, the general feedback to HarmonyOS is so far, so good," Xiang said.

Yu Chengdong, CEO of Huawei's device business group and CEO of the company's intelligent automotive solution business unit, said more than 300 million of the company's devices have now been equipped with HarmonyOS 2, which makes it the world's fastest-growing operating system.

Meanwhile, more than 170 million third-party products that are equipped with HarmonyOS Connect for the internet of things have also been shipped out of factories to retailers across China, Yu said.

HarmonyOS was first unveiled in August 2019, after the US government restricted Huawei's access to Google's Android operating system. But Huawei has underlined that HarmonyOS is not a replacement to Android. Instead, it is a next-generation OS designed for the IoT era and seeks to deliver a smooth experience across different devices.

HarmonyOS has already been used in a wide range of devices including smartphones, PCs, tablets, smartwatches, and smart home appliances such as ovens. Huawei also developed an in-car version of the HarmonyOS for electric vehicles it co-produced with Chinese carmaker Seres.

Yin Dong, a Beijing-based software developer who has been using tools from HarmonyOS to develop mobile applications for months, said he is optimistic about the operating system's future, but more efforts are needed to build a more vibrant software ecosystem centering around HarmonyOS.