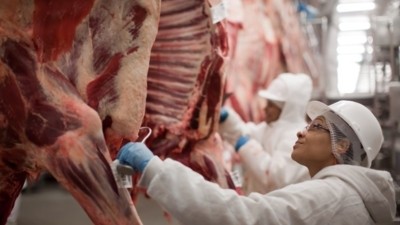 The slick packaging is eye-catching, and it also has an innovative label that tracks the contents from pasture to plate.

Rondatel is the only meatpacking plant in Uruguay that tracks its meat by animal on the label that reaches the end consumer, General Manager Marcos Antelo told Xinhua.

Consumers "can scan the barcode and see the animal's route from birth -- how old it is -- and trace the food they are going to consume," he added.

Rondatel, which has a plant in the southwestern department of Colonia and another in capital Montevideo, exports to several markets, including Europe and the United States, but it is betting big on China.

The company participated in the first China International Import Expo (CIIE) in Shanghai in November and plans to do so again this year.

Last year, the company shipped $80 million worth of meat to China, or 40 percent of its total exports.

"The premium cuts for China are packaged in a special box, black. The meat that goes in those boxes is the best meat," Antelo said.

"It is a very tender meat, lean, with little fat. The animals roam the pasture, walk a lot, and develop muscle tissue and no fat," Antelo said, adding "that's why our meat has a different taste."

They are "the highest value products and the most sought after, because it's lean meat and tracked," he added.

In addition, the meat contains no hormones and a lot of care goes into the sanitary aspects, he said.

A tour of the plant located outside Montevideo highlights the checks in place to maintain hygiene and food safety.

Chinese consumers are getting to know the Uruguayan brand, and the company has been receiving more orders for the black box, said Antelo.

At the import expo, he recalled, one Chinese businessman asked for a shipment of 40 containers a month, which "right now we can't do. We can do 20 containers, some 500 tons. That's why the surest thing to do is to expand to 30 or 35 containers per month."

The challenge now is to ensure Rondatel can keep up with the growing demand. The company plans to boost production by 35 to 40 percent by adding workdays and expanding warehousing and processing capacity.

"We are going to invest in infrastructure to focus on the Chinese market and produce more specifically for China," Antelo said.