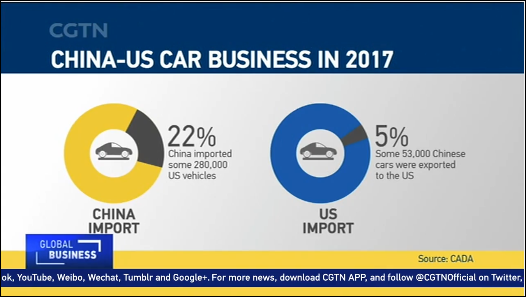 Caught in the crosshairs of China-US trade tensions is the US auto industry.

Part of China's retaliation to US tariffs will target American-assembled cars. China's counter-duties will not only impact American automakers, but also foreign car brands assembling their vehicles in the US.

It's been challenging times for many Chinese car importers, who have stopped stocking US cars or foreign cars assembled in the US, to brace themselves for a tit-for-tat escalation in China-US trade frictions.

Li Yong, a senior fellow at the China Association of International Trade, said that the retail price of American cars will increase substantially, which is going to impact the consumers’ purchase choices, and probably lead to a reduction of sales.

"That is going to be very counter-productive. It will hurt the US auto industry for sure. And the loss would also affect other countries. So it’s a conflict that nobody is going to win," Li Yong said.

According to the China Automobile Dealers Association (CADA), last year, China imported some 280,000 US vehicles, or 22 percent of China's total imported cars, while only some 53,000 Chinese cars were exported to the US, just 5 percent of the total.

Analysts say that in the long run, nobody is immune to losses if trade tensions continue to worsen.

In this trade war, brands from other countries are also involved. Sales for some vehicle models from countries like Germany and Japan would be affected in China because they have production lines in the US. The 25 percent levy also applies to them.

The tariffs will not simply lower the number of cars shipped from the US, analysts warn that companies might shift their production lines from the US to other countries.

Beijing said that slapping new tariffs in fact strikes the companies not only from China, but also the US itself and other countries. And many sides, including those in the auto industry, hope to avoid frictions, and protect global free trade and multilateralism.