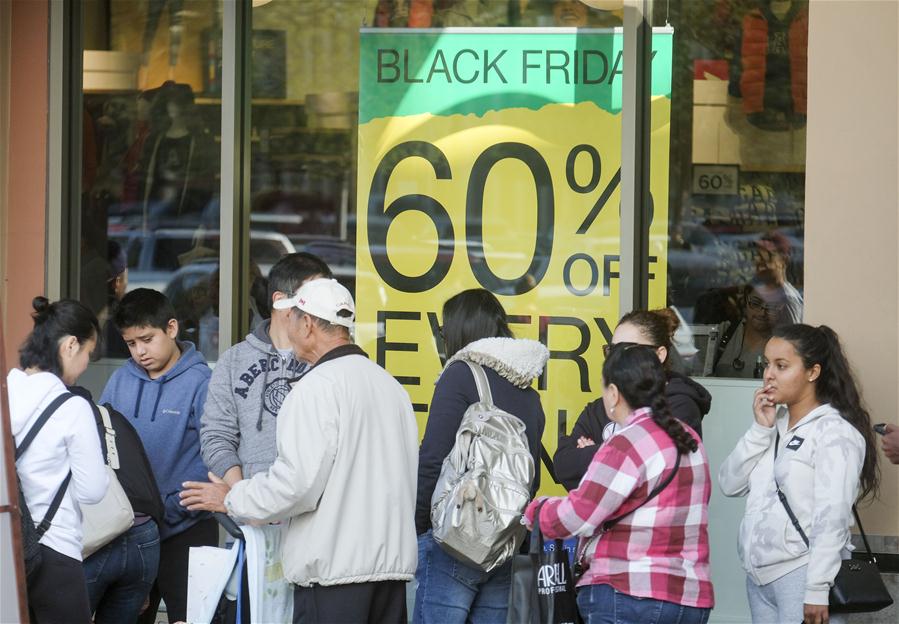 Customers wait in line to enter a store during the Black Friday sale at the Citadel Outlets in Los Angeles, the United States, Nov. 23, 2018. (Photo: Xinhua)

WASHINGTON, Nov. 23 (Xinhua) -- Online spending is expected to hit more than 6.4 billion US dollars on Black Friday, said Adobe Analytics, which tracks 80 percent of online transactions at 100 of the largest retailers in the United States.

On Black Friday, consumers are likely to save 16 percent for computers, 33 percent for tablets and 22 percent for televisions, making it a preferable time for consumers to buy electronic products, Adobe said in a report Friday.

Thanksgiving Day online sales totaled a record 3.7 billion US dollars, up 28 percent from a year ago, Adobe Analytics said. Smartphones drove 54 percent of traffic to retail sites and made up 37 percent of all e-commerce sales.

From Nov. 1 to Thanksgiving (Thursday), online sales have reached 38 billion, up 18.6 percent from last year. Some 60 percent of the revenue came from desktop, 30 percent from smartphones, and 10 percent from tablets.

For the whole holiday season, which started in late November and will last for more than a month, online sales could hit a record 124 billion dollars, up by 15 percent from last year, Adobe Analytics said.

Figures from market research firm eMarketer put overall US holiday online sales at around 123 billion dollars, which accounts for 12 percent of the estimated 1 trillion retail sales for this season.