BUSINESS US' brinksmanship over tariffs to rock markets; won't work with China: analysts

US' brinksmanship over tariffs to rock markets; won't work with China: analysts 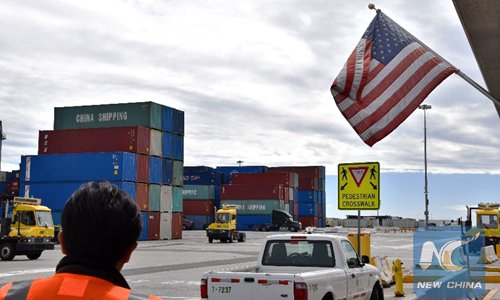 Stakes are high as skittish global investors watch closely whether or not US President Donald Trump will decide to stop a fresh batch of tariffs on billions of dollars worth of Chinese goods planned for December 15 - a decision Chinese analysts say could impact ongoing trade talks for a phase one deal, as well as global financial markets and US consumers' wallets.

The US appears to be playing a game of brinksmanship by attempting to use the tariffs as leverage to pressure China in ongoing trade negotiations for a phase one trade agreement, further throwing global trade and financial markets into uncertainty, analysts noted. Such an intention will not work with China, which will likely keep firm on key issues, they said.

While there have been some signs that Trump might delay the new tariffs on $160 billion worth of Chinese products, including toys and electronics, the US has not made any official announcement yet, raising uncertainty over the delicate ongoing negotiations aimed at resolving the 18-month long bruising trade war and adding to the possibility of a new wave of tit-for-tat tariff battles.

In direct response to the US tariffs, China announced in late August that it would impose tariffs of 10 percent and 5 percent on more than 3,300 types of US goods, including auto parts and chemicals, starting on December 15. If the US goes ahead with its tariffs, China will also respond in kind, analysts said.

The US' lack of sincerity in moving along the trade talks have backed Trump into a corner, where he faces a tough decision, analysts said.

"The tariffs' impact on US consumers will be tangible, so the US also does not want the tariffs, but it also wants to use them as leverage in the trade talks," Song Guoyou, director of the Fudan University's center for economic diplomacy in Shanghai, told the Global Times on Wednesday.

Recent mixed signals out of Washington also underscored the dilemma faced by Trump. US Agriculture Secretary Sonny Perdue said on Monday that Trump did not want to implement the new tariffs but there has to be "movement" from China, according to Reuters. But The New York Times reported on Wednesday that Trump could go either way, citing people with knowledge of the deliberations.

"The US thinks that China is being hurt more in the trade war and is eager for a trade agreement. And based on this miscalculation, it wants to gain more in the trade negotiations, but China also has a bottom line," said Sang Baichuan, director of the Institute of International Business at the University of International Business and Economics in Beijing, noting that China will not back down from its demand of removing existing tariffs for a trade agreement.

Apart from rolling back tariffs, Chinese officials have also insisted that any potential deal must be mutually beneficial and acceptable and the US' request for agricultural purchases must be reasonable and based on market rules.

"If the US keeps using the signing or not signing of a trade deal to demand things that go beyond China's bottom line, it will not work," Song said, adding that the new tariffs will have a much bigger impact on the US than China because US consumers will face higher prices. "For China, the bearish sentiment [toward the tariffs] has already evaporated… the country is well prepared to cope with that."

The implementation of the tariffs will also likely prompt stock selloffs around the world, as it would further cast a dark cloud over the global economy, which is already under mounting downward pressure, Song said. "The best scenario is that a deal could be reached," he said.