US business community hopes to get back to ‘tariff-free’ situation

Despite conflicting signs from China and the US regarding the removal of tariffs in recent days, the US business community has high hopes for a phase-one deal, hoping the agreement can be signed soon and that the two sides can get back to a "tariff-free" situation. 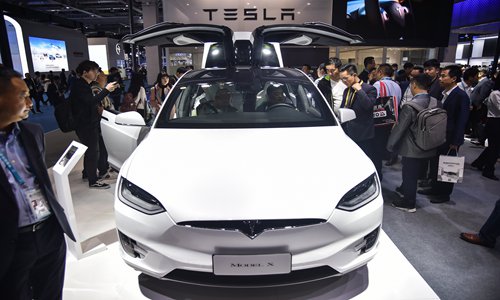 People visit a Tesla stand during the second China International Import Expo in Shanghai on Wednesday. Tesla said it will increase investment in the Chinese market, which has great development prospects, dismissing US calls for US companies to relocate amid the US-launched trade war. (Photo: AFP)

"We hope [the phase-one deal] comes into play soon. What matters is the content of the agreement and it being signed [by China and the US]," Greg Gilligan, vice chair at the American Chamber of Commerce in China, told the Global Times on the sidelines of the Caijing Forum 2020 on Tuesday in Beijing.

The agreement, which was widely expected to be signed during the APEC Summit in Chile but later cancelled due to protests, could include broader terms than just purchasing agreements, according to Gilligan.

"We hope tariffs could be reduced. We don't favor tariffs because our members said that tariffs are hurting their businesses. We naturally want to get back to a tariff-free situation," Gilligan added.

There have been uncertainties in recent days over whether China and the US could reach a consensus on conditions for a phase-one deal.

Last week, China's Ministry of Commerce said that Beijing had agreed with Washington to lift existing tariffs in phases. But US President Donald Trump told reporters at the White House that he hadn't "agreed to anything," in particular a rollback on tariffs.

"[What] negotiators say in public is often part of the negotiation, and it's not always what's said behind closed doors [that determines the deal]," Gilligan said, while acknowledging that there are a lot of challenging issues for both sides to work on before a phase-one deal can happen.

The US is scheduled to kick in another round of tariffs on Chinese imports on December 15, mainly on consumer goods. Gilligan said that if progress is made on the phase-one deal, the US probably will not levy the tariffs as planned.

"We also hope a second-phase deal will soon follow the phase-one deal. Economic relations are the underpinning for China-US relations. And as the two largest economies in the world, what China and the US do together has a big impact on other economies as well," Gilligan noted.