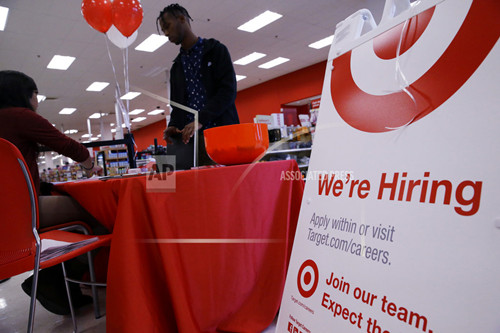 October 15, 2017, a job seeker, standing, talks with a Target human resources representative at a Target store in Chicago. On Wednesday, Nov. 1, 2017, payroll processor ADP reports how many jobs private employers added in October. (Photo: by Nam Y. Huh from AP)

WASHINGTON (AP) — U.S. businesses added a solid 235,000 jobs in October, according to a private survey, partly reflecting a rebound from the previous month when hiring was held back by several hurricanes.

Payroll processor ADP said Wednesday that last month's gain was the largest in seven months. Hiring fell to just 110,000 in September, the lowest in nearly a year.

October's rebound was driven by construction firms, which reported a huge gain of 62,000 jobs, a sign that rebuilding efforts after Hurricanes Harvey, Irma and Maria are already under way.

The government's jobs report in September showed that damage from the hurricanes caused a loss of 33,000 jobs that month, the first drop in seven years. The ADP report doesn't include government payrolls and often diverges from the official figures.