US businesses not exiting HK after national security legislation: chamber 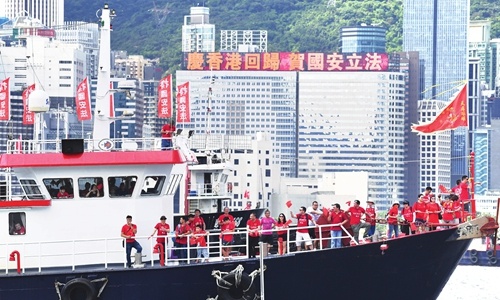 About 100 fishing boats in Hong Kong sail on July 1 in Victoria Harbor to celebrate the 23rd anniversary of its return to the motherland and the first day of the enforcement of the National Security Law in the city. Photo: cnsphoto

The legislation on safeguarding national security in Hong Kong is a step to maintain the special administrative region's competitive business environment, which will only strengthen the city's role as an international financial hub, China's Foreign Ministry said on Monday.

A previous report from the American Chamber of Commerce in Hong Kong says there is no sign of large-scale US capital exiting the city after the law's enforcement.

Hong Kong will remain the regional headquarters for the vast majority of the member businesses surveyed by the chamber, and up to 60 percent of the companies surveyed said that they have already started or are planning new operations in the Guangdong-Hong Kong-Macao Greater Bay Area. Many companies regard the consumer market in the Great Bay area as having huge opportunities to boost their profit.

Jessica Bartlett, head of the American Chamber of Commerce in Hong Kong, said during an online event earlier this month that she had not seen any evidence of US capital exiting Hong Kong due to the national security legislation.

The reports "have once again proven that the National Security Law is a foundation that underpins the long-term safety and prosperity of Hong Kong," said the Foreign Ministry, and that the law is providing a safer, more stable and sustainable environment for all international investors, including those from the US.

"Any unfounded criticism or speculation against the National Security Law is self-defeating," the ministry said.