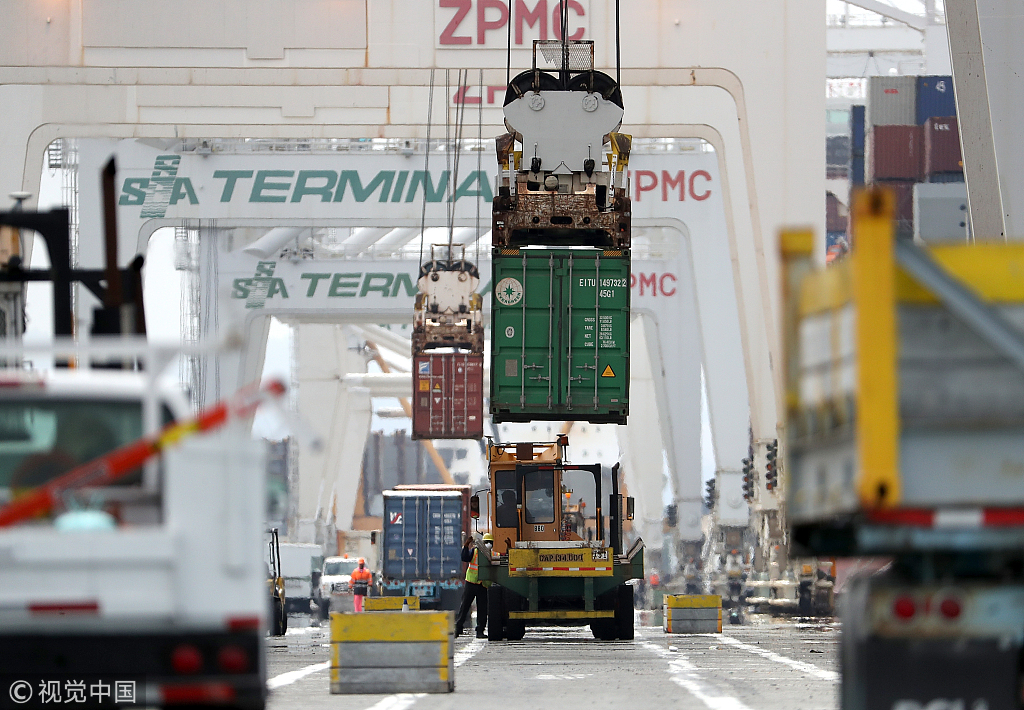 A shipping container is offloaded from the Hong Kong based CSCL East China Sea container ship at the Port of Oakland, in California, US, June 20, 2018. (File photo: VCG)

NEW YORK, Dec. 14 (Xinhua) -- The phase-one economic and trade deal that the United States and China have announced is "the positive signal in that it eliminates the imminent threat of new tariffs," a leading U.S. economist said on Friday.

"The good news is that the threat of tariffs has been moderated to some degree," Stephen Roach, a senior fellow at Yale University's Jackson Institute of Global Affairs, told Xinhua in a phone interview.

The Chinese side said in a statement that the two sides have agreed on the text of a phase-one economic and trade agreement based on the principle of equality and mutual respect, and reached consensus that the U.S. side will fulfill its commitments to phase out its additional tariffs on Chinese products.

The agreement will help the two countries enhance economic and trade cooperation, effectively manage, control and resolve differences, and promote the steady development of bilateral economic and trade relations, said the statement, adding that it will also boost confidence of the global market, stabilize market expectations, and create a favorable environment for normal economic, trade and investment activities.

"It underscores the commitment of both nations to provide some relief to the tariff-related pressures on both economies as well as the broader global economy," said Roach.

The U.S. economist, who is also a China-U.S. trade observer, urged further joint efforts to address key structural differences, which would be conductive to enhancing trust.

The seasoned analyst said both sides need to focus more common ground "that would continue to bind the two economies together, rather than underscore the differences in conflicts" so as to repair the soured relationship.

China and the United States have agreed to complete their necessary procedures including legal review, translation and proofreading as soon as possible, and discuss the detailed arrangements for the official signing of the agreement.