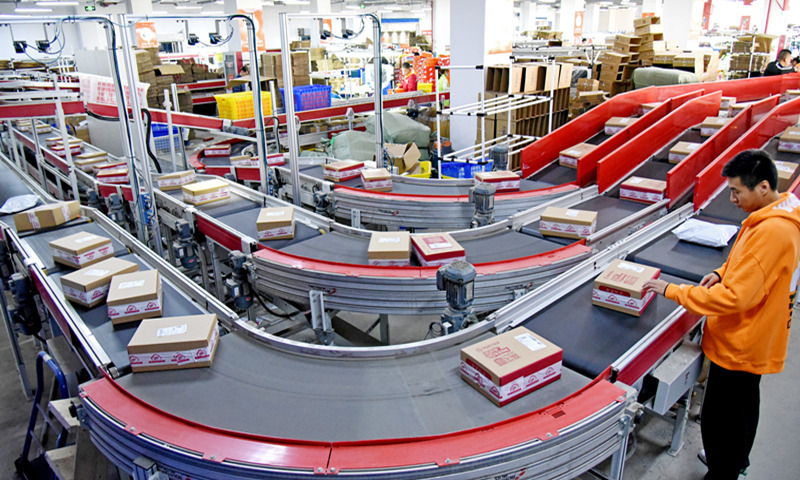 Despite fraught ties and an ongoing trade war between China and the US, American companies seem to have just reaped a bumper sales harvest during China's November shopping festivals that will cushion their virus-battered balance sheet, initial sales data provided by China's e-commerce giants showed on Wednesday.

Notably, US firms are doing well on the shopping festival, selling the second-largest amount of goods by country during the first 16 hours on Wednesday, the Singles' Day, trailing only behind Japanese firms, said Tmall, the Chinese e-commerce giant.

"The overall performance of American companies is very good. For example, the sales of Estee Lauder and Procter & Gamble have achieved very large growth in this year's shopping festival. Some products of Estee Lauder have already generated a sale of 2 billion yuan ($303 million)," Liu Bo, vice president of Alibaba Group, told the Global Times.

Liu added that the online sales performance of the US products is the same as usual, noting the "very smooth" sales despite the offline consumption being affected by the epidemic.

US firms are also learning from their Chinese counterparts to adopt some of the most effective sales and marketing approaches trending in China, such as livestreaming e-commerce.

Reading from the performance of this year's Double 11 festival, the livestreaming of the US products is quite outstanding, Yu Feng, general manager of e-commerce content with taobao.com, told the Global Times on Wednesday.

Despite fraught bilateral ties and a trade war that has seen tariffs imposed on tens of billions of dollars of goods, US companies are actually increasing their exposure in the Chinese online shopping festival and China's swiftly recovered economy and recuperate some of their sales losses suffered in the home market amid the economic onslaught of the COVID-19 pandemic.

On Chinese e-commerce platform Suning, which also celebrates the Singles' Day, 10,000 bottles of Estee Lauder's face cream were sold out in just two minutes and 5 million facial masks were sold in 30 minutes, according to a statement sent to the Global Times on Wednesday.

This came as the brand's global sales fell 9 percent year-on-year in the three months ended September 30.

According to JD.com, the country's second-largest e-commerce company, US companies including Apple, Mobil, Coach, Walmart were among the most successful sellers on November 1, when its shopping festival began.