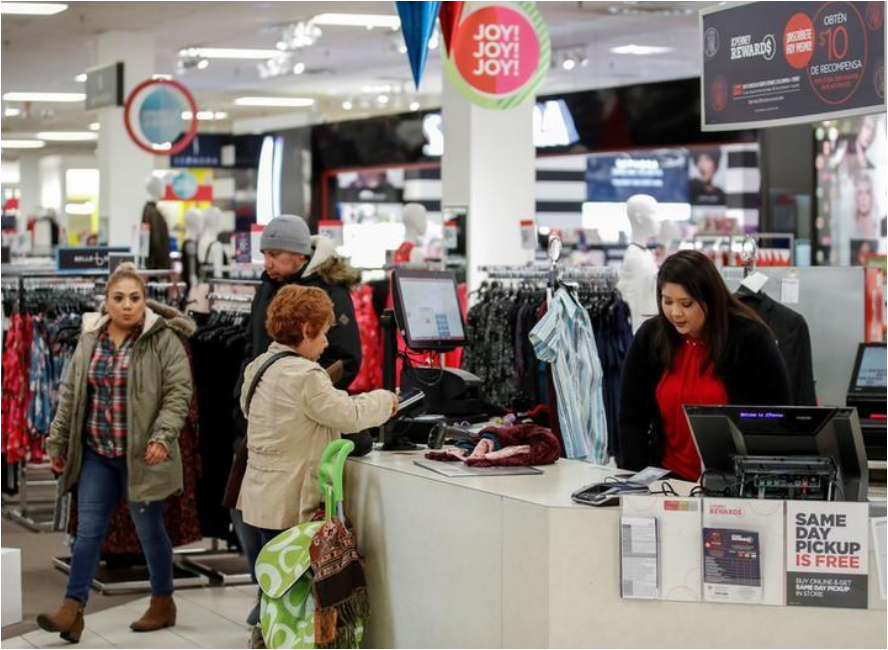 A shopper makes a purchase at the J.C. Penney department store in North Riverside, Illinois, US, November 17, 2017. ( Photo: Reuters)

Consumer confidence rebounded in May, but households were a bit pessimistic about their short-term income prospects even as they expected strong job growth to persist, which could restrain consumer spending.

The Conference Board said on Tuesday its consumer confidence index rose 2.4 points to a reading of 128.0 this month from a downwardly revised 125.6 in April. The index was previously reported at 128.7 in April.

“If consumers don’t step up their spending ... then the growth outlook this year may disappoint on the weak side,” said Chris Rupkey chief economist at MUFG in New York.

US financial markets were little moved by the data amid a deepening political crisis in Italy. The dollar rose to a 10-month high against the euro, while US Treasury yields fell. Stocks on Wall Street dropped, with the S&P 500 and Dow Jones Industrial Average touching near three-week lows.

The Conference Board’s so-called labor market differential, derived from data on respondents’ views on whether jobs are plentiful or hard to get, increased to 26.6 in May, the best reading since May 2001, from 22.7 in April.

That measure, which closely correlates to the unemployment rate in the Labor Department’s employment report, suggests that labor market slack continues to shrink.

But consumers were less upbeat about their short-term income prospects. The share of consumers expecting an improvement in their income fell to 21.3 percent this month from 21.8 percent in April. The proportion expecting a decrease rose to 8.2 percent in May from 7.9 percent in the prior month.

The weak income readings are despite massive tax cuts which the Trump administration claimed would boost paychecks for American workers. The $1.5 trillion tax cut package came into effect in January.

Consumers also showed a reluctance to commit to purchases of big-ticket items this month, with intentions to buy automobiles, houses and appliances declining. Consumer spending braked sharply in the first quarter and there are signs that it picked up early in the April-June period.

The solid gains are at odds with recent data which had suggested a cooling in house prices. The Federal Housing Finance Agency reported last week that house prices edged up 0.1 percent in March from February.

The regulator’s index is calculated by using purchase prices of houses financed with mortgages sold to or guaranteed by mortgage finance companies Fannie Mae or Freddie Mac.

“While the weakness in the FHFA house price data raised some concerns that the trend in house price appreciation had started to shift lower, so far, the Case-Shiller data do not support that view,” said Daniel Silver, an economist at JPMorgan in New York.

The house price inflation is being fueled by an acute shortage of homes available for sale, which is hurting the housing market.