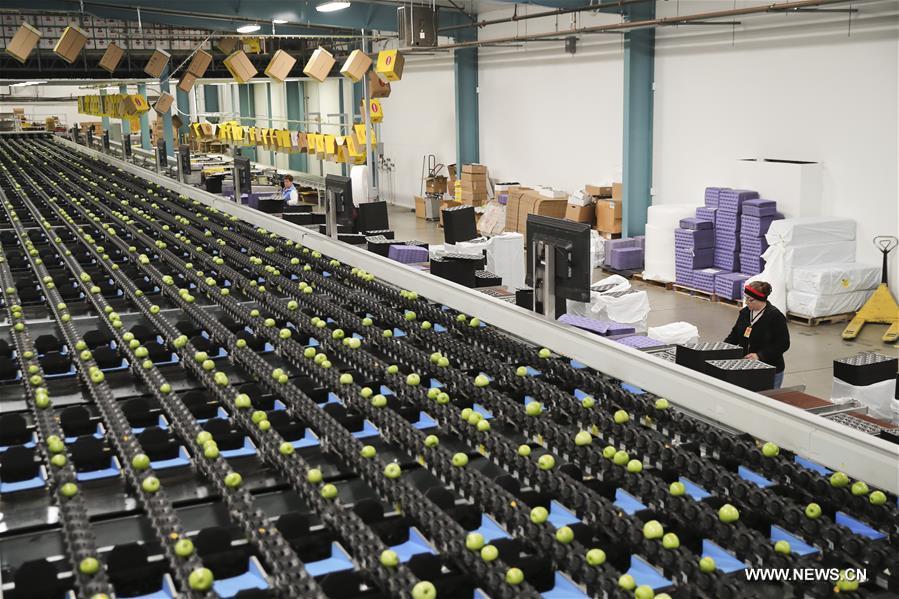 Granny smith apples are processed on a packing line at a packing house of Auvil Fruit Company in Wenatchee, Washington State, the United States, on Nov. 3, 2017. (Photo: Xinhua)

Approximately 80 percent of U.S. consumers surveyed recently indicated that they were concerned by the potential impact of the tariffs on prices, said Matthew Shay, president and CEO of the National Retail Federation (NRF), on Tuesday.

"We didn't see an impact over the holiday weekend," Shay told reporters at a media call on consumer spending from Thanksgiving Day through Cyber Monday, while mentioning that consumers are aware of and concerned by possible price increases as a result of additional tariffs.

Nearly 190 million U.S. shoppers made purchases during the five-day period, a 14-percent increase over the previous year, according to a new survey by the NRF and Prosper Insights & Analytics.

"I think right now what we're seeing is consumers have the ability to bifurcate their attitude, which is knowing they've got a concern about it (tariff) and their actions and activities, which is they're still out shopping and behaving in a very confident way," Shay said.

Shoppers spent an average 362 U.S. dollars on holiday items during the five-day period that ended Monday, up 16 percent from the same period last year, the survey showed.

Despite noticeable growth in holiday spending, Shay said if the U.S. administration would impose tariffs on Chinese imports scheduled for Dec. 15, "I think obviously it's going to have an impact on substantial new numbers of consumer goods."

Retailers so far have taken a number of approaches to mitigate the effects of tariffs "both in the immediate near-term and in the longterm," Shay said.

He said that not all retailers have the same ability to address these challenges. "And that burden and the negative consequences of the uncertainty falls disproportionally on midsize, smaller, independent retailers."

Speaking of the U.S.-China trade talks, the NRF president said "the best thing that we can all do is let the parties try to work together to resolve this," adding that a positive resolution is the "best possible outcome" for the economy, for consumers and workers in this country.