BUSINESS US' crackdown on Chinese IPOs ‘no surprise’

US' crackdown on Chinese IPOs ‘no surprise’ 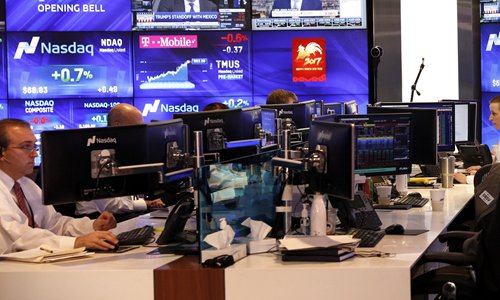 Staff look at their screen in Nasdaq, New York, in January 2017. (Photo: VCG)

It is no surprise that the US would crack down on Chinese companies that plan to get listed there, as the country leverages its position as the world's No.1 economy to exclude fast-growing economies like China, a financial expert said.

"It's reported that US President Donald Trump is considering delisting Chinese companies from US stock exchanges, which is vicious and doesn't comply with market rules. Many in China anticipate more restrictions on future listings of Chinese companies," Dong Dengxin, director of the Financial Securities Institute at the Wuhan University of Science and Technology, told the Global Times on Wednesday.

Media reports have said that it is becoming harder for small Chinese companies to launch IPOs on the US' Nasdaq board because the exchange is imposing more restrictions and slowing down approvals.

The reason, according to a Reuters report, is that an increasing number of small Chinese companies raise most of the capital in their IPOs from Chinese investors instead of US sources.

Nasdaq hadn't replied to an email seeking comment as of press time.

A manager from one of the Big Four accounting firms, who helped a small Chinese company get listed on the Nasdaq in September, confirmed the tightening trend to the Global Times on Wednesday.

"In the first half of this year, Nasdaq proposed several changes to its IPO rules, one of which requires 50 percent or more of a company's shareholders to invest at least $2,500 each in an IPO," he said. He preferred to remain anonymous.

The new rules appear to be aimed at Chinese companies, as most of them listed on the Nasdaq and New York Stock Exchange raise money from Chinese investors, the manager said, adding that foreign investors who are unfamiliar with Chinese companies' business models and culture are unwilling to buy their shares.

China-based online real estate platform Fangdd Network Group and home rental platform Q&K International Group filed for separate IPOs on the Nasdaq in the past week. Neither had commented as of press time.

Although IPO valuations in the US are lower than in China, US stock exchanges are attractive to Chinese companies because of less strict restrictions, the Big Four manager said. But if the threshold is raised, Chinese companies will likely revert to other markets.

Dong said that the Hong Kong Stock Exchange shows a high degree of inclusiveness, and hence companies will likely seek listings in the city or other markets like Singapore or Europe. "Many welcome the listing of Chinese companies, as they bet on China's tremendous growth potential," he said.

"China continues to open up its financial sector, while the US slams its door on Chinese companies. The US will trip over its own feet," Dong said.