BUSINESS US daydreaming in ordering its firms out of China

US daydreaming in ordering its firms out of China 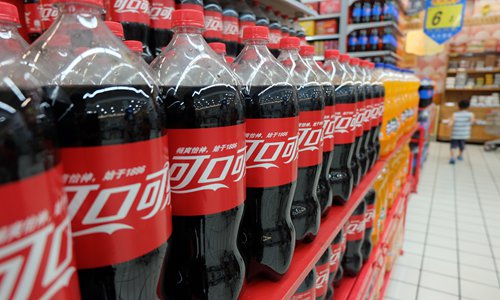 Coca-Cola beverages are sold in a supermarket in East China's Jiangsu Province on August 6, 2019. (Photo: VCG)

It's ironic that large US companies are either stressing their determination to take root in the opportunity-rich Chinese market, increase investment, or pluck up the courage to enter China for the first time, at a time when the US president is ordering them to give up a market that is cherished by international companies for its huge growth potential.

"It's just one beautiful daydream of US President Donald Trump that US companies will give up China," Liang Ming, a research fellow of the Chinese Academy of International Trade and Economic Cooperation under the Ministry of Commerce(MOFCOM), told the Global Times on Sunday.

Trump ordered US companies to "immediately start looking for an alternative to China, including bringing your (US) companies home and making your products in the US," according to a series of tweets he posted on Friday.

Trump announced on Twitter on Saturday that he will raise tariffs on $250 billion in Chinese goods to 30 percent from 25 percent starting on October 1.

He also said to raise tariffs on another $300 billion in products effective from September 1 from 10 percent to 15 percent.

Say 'no' with action

Contrary to what Trump has hoped and ordered, US companies are actually speeding up their business layout in the Chinese market.

Coffee giant Starbucks, for example, launched a series of products in China recently as its coffee alliance with Nestlé landed in the Chinese mainland market.

Electric vehicle maker Tesla is on the way to produce its first batch of Model 3 cars on its local assembly lines in its Shanghai Gigafactory before the end of this year, while CEO Elon Musk can't wait to launch another start-up - the Boring Co - in China soon.

Zhang Jiantao, vice president of Coca-Cola (Greater China, Korea and Mongolia) also said in a recent interview with the Global Times that China is a market that Coca-Cola "must not give up."

"There's no parallel for the innovative abilities and potential in China," Zhang said.

An employee at a US-based medical equipment firm headquartered in Shanghai said that the company has a complete manufacturing and sales industrial chain in China and it has no plans to move back to the US.

Liang said it would be "unrealistic" to force US companies to move back to the US by administrative order.

The goal of enterprises is to pursue profits, and the profits US companies can get by doing business or manufacturing in China are much larger than what they could earn in the US, Liang said. For example, if Apple moved its production lines back to the US, its costs could go up by 50 percent, he said.

"Moreover, many industries in the US no longer have the necessary facilities for manufacturing, including skilled workers," he said.

In a summit on Sunday morning, Dong Chao, another research fellow of the Chinese Academy of International Trade and Economic Cooperation under the MOFCOM, also said that multinational companies in the US have earned huge profits in China, and many US companies would find it difficult even to survive if they left such a gigantic market as China.

Dong cited the example of the automobile sector. "The Chinese market has become the major source of profits for many US car companies. If they lose the Chinese market, many US car giants will surely see their businesses slump and share prices plunge, and they will yield their advantages in the Chinese market to domestic, German and Japanese companies, which will pose a great risk to the US car industry," he said.

Liang said that only by cooperating with China and allowing Chinese companies to purchase US products on a large scale can the US reduce its trade deficit with China.

"This is almost the only answer," he said.