BUSINESS US economy expected to slow in Q3 amid supply constraints, inflation worries

US economy expected to slow in Q3 amid supply constraints, inflation worries

WASHINGTON, July 19 (Xinhua) -- After reaching its peak in the second quarter of the year, U.S. economic growth is expected to start slowing in the third quarter amid supply constraints and inflation worries, economists have said. 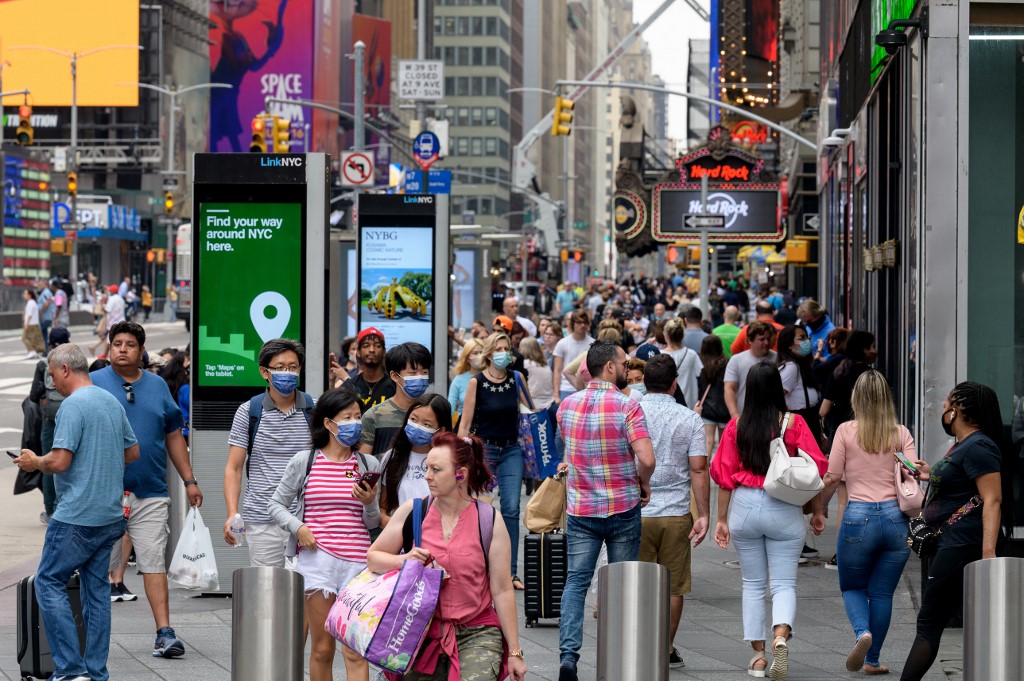 "The economy may well have moved past peak U.S. growth and peak inflation," Ethan Harris, head of global economics research at Bank of America Merrill Lynch Global Research, said in a recent note.

"We shouldn't be surprised as the current pace of growth and inflation are clearly unsustainable: an economy of roughly 2 percent annual long-term growth cannot run at a nearly 10 percent annualized rate for very long," Harris said, expecting U.S. economic growth to moderate in the coming months.

Harris trimmed his forecast for U.S. gross domestic product (GDP) growth in 2021 to 6.5 percent, down from the 7 percent previously estimated, as the economy seems to be "more constrained" than anticipated.

"This is showing up in two ways: restraint on goods production from supply-chain issues and limitations on services spending resulting from labor shortages," he said.

A survey released by the Federal Reserve last week showed that "supply-side disruptions became more widespread" in the United States, including shortages of materials and labor, delivery delays, and low inventories of many consumer goods.

"Labor shortages were often cited as a reason firms could not staff at desired levels, with firms in three districts delaying expansion or scaling back services due to understaffing," the Fed said in its latest survey on economic conditions, known as the Beige Book, based on information collected from its 12 regional reserve banks.

The survey also showed that prices increased at "an above-average pace" across the country, as seven Fed districts reported strong price growth and the rest saw moderate gains.

While some business contacts felt that pricing pressures were transitory, the majority expected "further increases" in input costs and selling prices in the coming months, according to the survey.

U.S. consumer prices in June rose 0.9 percent from the previous month and 5.4 percent from a year earlier, the largest 12-month increase in roughly 13 years, the Labor Department reported last week.

As rising prices led to a sharp deterioration in buying conditions for big-ticket items, U.S. consumer sentiment unexpectedly fell to a five-month low in early July.

The University of Michigan said last week that its preliminary consumer sentiment index fell to 80.8 in July from a final reading of 85.5 in June, marking the lowest level since February.

"Risks to the outlook appear balanced with upside risks from increased consumer spending out of savings offsetting downside risks from the Delta coronavirus variant," Daco said in a recent analysis.

Harris noted that it will be important to monitor services-related spending moving forward for any signs of a pullback, as behavior can shift due to the threat of the virus.

U.S. stocks fell sharply on Monday as fears over a resurgence in COVID-19 cases sparked a broad market sell-off on Wall Street.

The U.S. Commerce Department is scheduled to release its first estimate of U.S. GDP in the second quarter on July 29.

The New York-based Conference Board last week forecasted that U.S. real GDP growth will rise to an annual rate of 9 percent in the second quarter, up from 6.4 percent in the first quarter.

Then U.S. economic growth is expected to slow to an annual rate of 7.8 percent in the third quarter and drift down to a pace of 4.2 percent in the fourth quarter, according to the Conference Board.

A combination of strong growth and higher inflation is likely to move the Fed closer to announce tapering its asset purchases in the next few months.

Economists at Wells Fargo Securities estimated that Fed officials will begin to drop explicit hints about an impending taper in late summer or early fall, with a formal taper announcement occurring at the December policy meeting.

The Fed has pledged to keep its benchmark interest rates unchanged at the record-low level of near zero, while continuing its asset purchase program at least at the current pace of 120 billion U.S. dollars per month until the economic recovery makes "substantial further progress."

At a congressional hearing last week, Fed Chairman Jerome Powell said that the incoming inflation data "have been higher than expected" and the Fed is monitoring the situation very carefully.

"If we were to see that inflation were remaining high and remaining materially higher above our target for a period of time and that it was threatening to uproot inflation expectations and create a risk of a longer period of inflation, then we would absolutely change our policy as appropriate," Powell said.