BUSINESS US economy grew more slowly in 2018 than previously thought

US economy grew more slowly in 2018 than previously thought

The government says the U.S. economy grew more slowly in 2018 than it previously estimated, downgrading its estimate from 3% to 2.5%. President Donald Trump had frequently boasted of the 3% growth figure as evidence that his policies invigorated the economy. 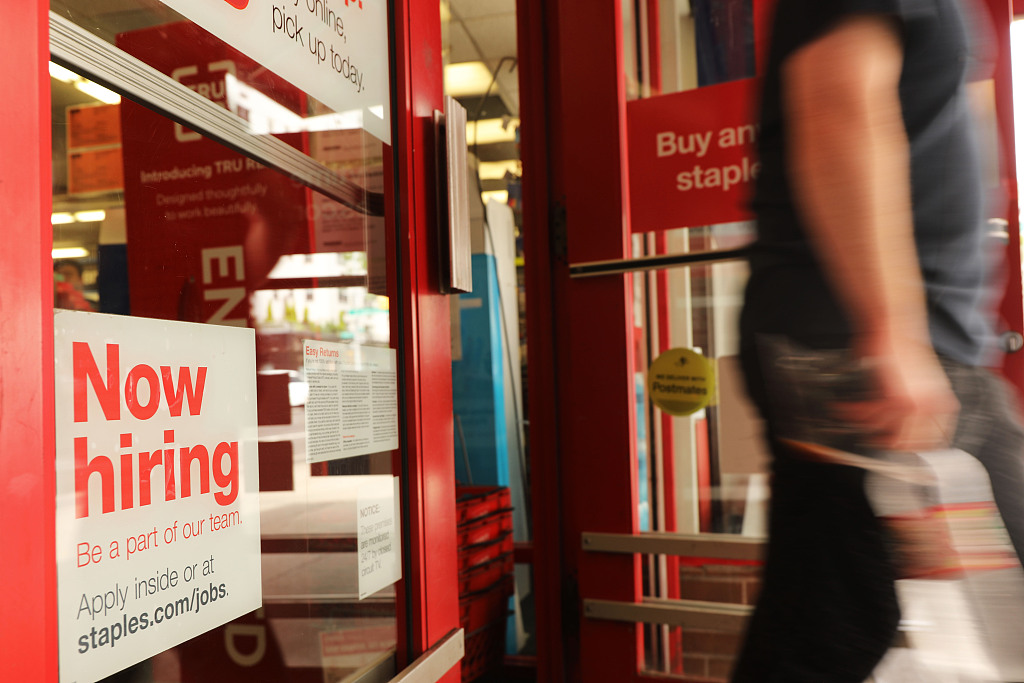 A hiring sign is displayed in a business window along a shopping street in lower Manhattan on July 05, 2019 in New York City. (Photo: VCG)

The department made the change based on more comprehensive data as part of its annual revisions to gross domestic product, or GDP, the broadest measure of the nation's output of goods and services. The revisions cover the five years from 2014 through 2018.

Overall, the changes don't significantly alter the broader trajectory of the economy. Growth picked up in 2017 and 2018 after a sluggish 2016, spurred by stronger overseas growth, increased government spending and the Trump administration's tax cuts.

Still, the revisions mean that growth failed to cross the symbolic 3% threshold last year, which it hasn't done since 2005. Most economists point to slower population growth and sluggish increases in worker productivity as the primary reasons for the shortfall.

Trump had been quick to celebrate the government's first report on 2018 growth, released in February, which showed that the economy expanded 3.1%. (The figure was subsequently revised lower to 3.

In March, Trump bragged on Twitter that last year's figure was the "BEST NUMBER IN 14 YEARS!"

Even that was somewhat misleading. It was the best in 14 years only when using a measure of four quarters of growth over a calendar year. But four years ago, under President Barack Obama, the economy expanded 3.4% over the four quarters ending in the second quarter of 2015.

But a second approach compares the size of the economy at the end of one year with its size at the end of the previous year. This is the barometer that now shows 2.5% growth for 2018. This measure is preferred by some institutions and many economists because it is thought to present a clearer picture of what happened in a given year. The Trump administration's Council of Economic Advisers also prefers this method.

Economic growth in 2017 was revised higher, to 2.8%, according to the White House's preferred metric, from its previous level of 2.5%, partially offsetting last year's downgrade.

The government's revisions show that growth slowed more sharply in the fourth quarter of 2018 than previously thought — to just 1.1% at an annual rate, down from an earlier estimate of 2.2%. Growth in the final quarter of 2017 was revised much higher — from 2.3% to 3.5%.

Most other changes were minor. Consumer spending grew faster last year than previously thought — 3% compared with an earlier estimate of 2.6%. Still, that increase was offset by the reduction in business investment spending.

The GDP figures are revised as the Commerce Department's Bureau of Economic Analysis incorporates new data into its estimates. The Census Bureau, for example, issued more comprehensive annual data on services spending that showed that companies had invested less in software compared with previous quarterly reports.

Many economists argue that such investment spending has been put off because of the uncertainty raised by Trump's trade policies. Those import taxes have raised costs for many companies, and it's unclear how long the additional tariffs will remain in place.