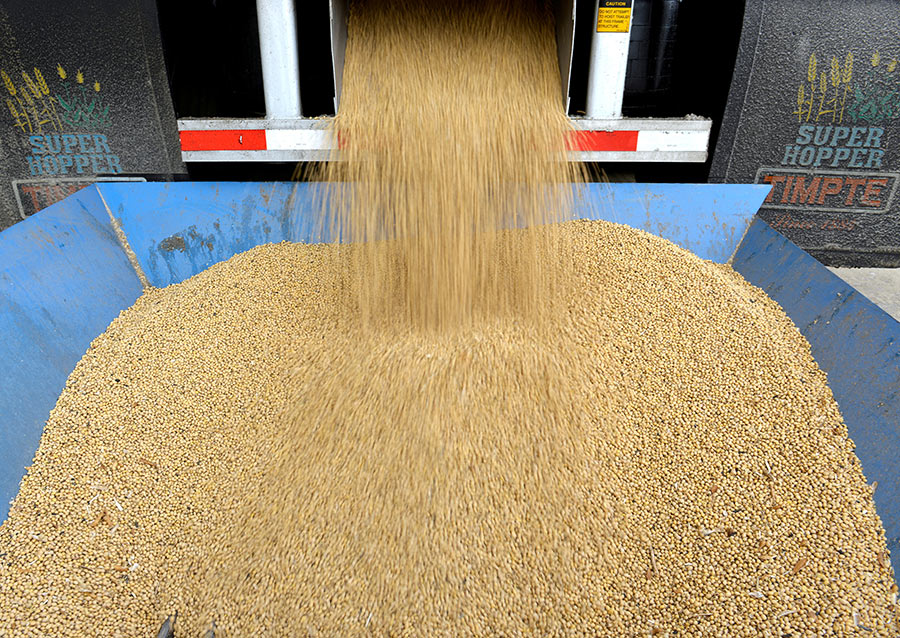 An incoming truckload of soybeans is unloaded at a farm in Fargo, North Dakota, US, Dec 6, 2017. [Photo/Agencies]

CHICAGO - A US farmer in the state of Iowa felt relieved after the positive turn in China-US trade talks.

In an article titled "My farm crops gained $45,000 in value since Trump delayed China trade war" published Wednesday on the Hill, a top US political website, Tim Burrack said his gain resulted from the commodity markets reacting favorably to the progress on China-US trade talks.

"It ties directly to what could be a successful round of trade negotiations," he wrote. "I want to thank our trade diplomats for this development. They have us headed in the right direction. Maybe something really good is about to happen."

Burrack also wrote of his pessimism after the US announcement of steel and aluminum tariffs on imports in March, following which threats of trade retaliation escalated. China announced a series of tariffs that targeted American exporters across a range of industries. Farmers were among the hardest hit.

"The proposed tariffs of 25 percent on soybeans and pork products were brutal. They would have virtually wiped out an entire market for us," Burrack wrote.

"The value of my farm actually declined. I saw it happen right before my eyes, as commodity markets responded to the realization that American farmers were on the verge of losing a vital customer," Burrack wrote, adding: "For the last two months, it's been all pain and no gain."

Burrack called the consensus reached by China and the United States in trade talks as "a welcome announcement."

"I hope our trade diplomats pull it off, and pull us back from the brink of a trade war that will hurt farmers and consumers and just about everybody, a trade war that nobody can win," Burrack wrote.

Burrack admitted that the negotiations are complicated. "The bargaining involves a give and take, of course," he said.

"The goal of these trade talks should be to ensure that the bullet never gets shot, because I know who it will hit," Burrack concluded.