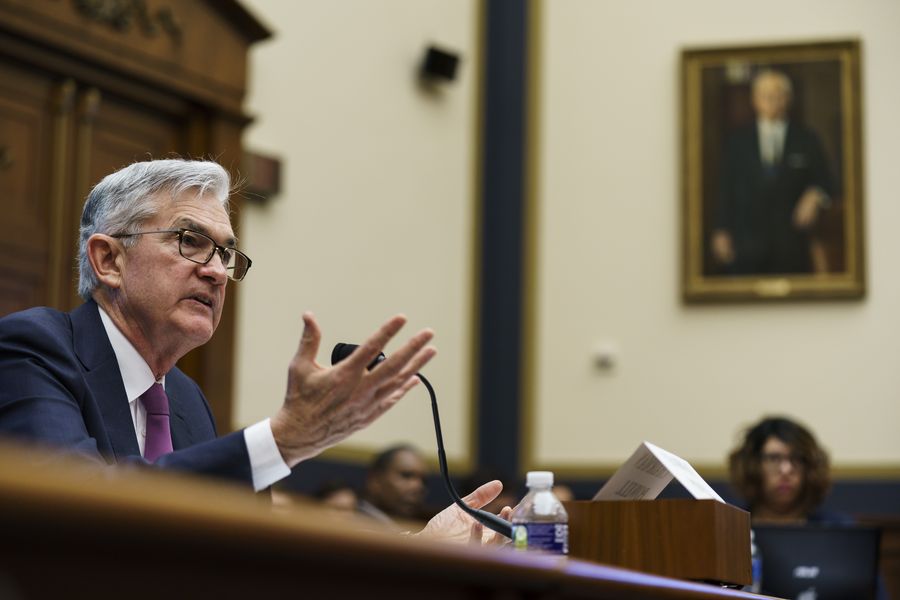 Photo taken on Feb. 11, 2020, shows U.S. Federal Reserve Chairman Jerome Powell testifying before the House Financial Services Committee during the Monetary Policy and the State of the Economy hearing on Capitol Hill in Washington D.C., the United States. (Photo: Xinhua)

"The scope and speed of this downturn are without modern precedent, significantly worse than any recession since World War II," Powell said in prepared remarks webcast by Washington-based think tank Peterson Institute for International Economics (PIIE).

The central bank chief said while the economic response has been "both timely and appropriately large," it may not be the final chapter, given that the path ahead is both "highly uncertain" and subject to "significant downside risks."

Powell noted the record shows that deeper and longer recessions can leave behind "lasting damage" to the productive capacity of the economy.

"Avoidable household and business insolvencies can weigh on growth for years to come," the Fed chairman said. "Long stretches of unemployment can damage or end workers' careers as their skills lose value and professional networks dry up, and leave families in greater debt."

"The loss of thousands of small- and medium-sized businesses across the country would destroy the life's work and family legacy of many business and community leaders and limit the strength of the recovery when it comes," Powell continued.

"A prolonged recession and weak recovery could also discourage business investment and expansion, further limiting the resurgence of jobs as well as the growth of capital stock and the pace of technological advancement," he said.

Noting that the result could be an extended period of low productivity growth and stagnant incomes, the Fed chairman said more policy measures might be needed to support the recovery and avoid prolonged recession.

"At the Fed, we will continue to use our tools to their fullest until the crisis has passed and the economic recovery is well under way," Powell said, while reiterating that the Fed has lending powers, not spending powers.

The Fed has ruled out "negative interest rates." Powell said it can lend money to solvent companies to help carry them through the crisis, but a longer downturn would likely bankrupt some previously healthy companies without more help from the government.

"Additional fiscal support could be costly, but worth it if it helps avoid long-term economic damage and leaves us with a stronger recovery," he said.

House Democrats on Tuesday unveiled a new 3-trillion-dollar coronavirus relief bill, but it is unlikely to be approved by a Republican-led Senate, according to a report from CNBC.

At a webinar hosted by Brookings Institution on Tuesday, White House economic adviser Kevin Hassett said the administration is in a short-term wait-and-see mode and will gather more data in the reopening process before making a decision on a new relief package.

Powell's remarks came a few days after the U.S. Bureau of Labor Statistics reported a staggering 20.5-million job loss in April, which erased a decade of job gains since the global financial crisis and pushed the unemployment rate to a record 14.7 percent.

Powell said the COVID-19-induced job crisis has disproportionately weighed on lower-income households and families. Teasing data from a Fed survey to be released Thursday, he said among people who were working in February, almost 40 percent of those in households making less than 40,000 dollars a year lost a job in March.

"This reversal of economic fortune has caused a level of pain that is hard to capture in words, as lives are upended amid great uncertainty about the future," Powell said, adding that he expects unemployment to peak next month.