Despite the uncertainty brought by escalating China-US trade tensions, US companies have reportedly been expanding business in China in recent days. 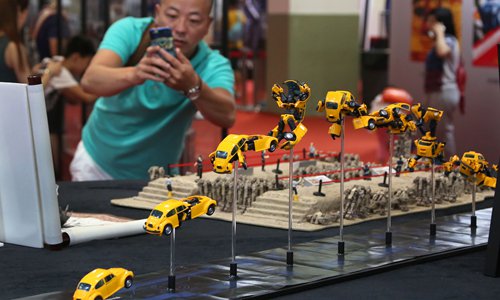 A visitor takes a photo of a transforming car toy at Cybertron Con, organized by US toymaker Hasbro in Shanghai in July 2016. (Photo: IC)

Taking into account China's huge demand and ongoing trend toward upgraded consumption, industry insiders pointed out that US firms are not likely to abandon the Chinese market, and the lingering trade rows may drive more US firms to localize production in the country.

"Currently, we produce approximately 70 percent of our products in China. Several years ago, we began to strategically diversify our global supply chain… but we plan to keep the majority of our manufacturing in China," Julie Duffy, senior vice president of global communications at US toymaker Hasbro, said in an email sent to the Global Times, responding to inquires about the impact of tariffs on its Chinese business.

The company, whose core brand includes Transformers and My Little Pony, has eyed stronger China expansion, as the Chinese market has become "a core growth area" for Hasbro, its senior executive said in a media report in October.

In addition to Hasbro, Google is said to be in talks with Tencent Holdings, Inspur Group and other Chinese companies to offer its cloud services in the Chinese mainland, Bloomberg reported over the weekend.

Too big to abandon

"US companies attach great importance to the Chinese market and they cannot afford to abandon it as the huge demand in domestic consumption is quite attractive to them," Zhang Qi, a research fellow with the Development Research Center of the State Council, told the Global Times.

Tu Xinquan, dean of the China Institute for WTO Studies at the University of International Business and Economics in Beijing, agreed.

"US companies have strong confidence in China's economic growth. They know that the country's economic prospects, combined with the rise of the middle class, which has led to upgraded consumption, could create huge profits for them," Tu told the Global Times on Sunday.

According to a white paper released by the American Chamber of Commerce on May 30, one-third of member companies plan to expand their investment in China by more than 10 percent in 2018.

More and more US companies have identified China as a vital market, which may lend the country more bargaining chips amid China-US trade rows, industry insiders said, warning that the US should think carefully about the potential impact on US enterprises before taking action.

A Beijing-based resident surnamed Chen, who just bought a Lego toy for his niece, said that the reported 25-percent tariffs on Chinese imports have angered him.

"I have hesitated between the choice to buy Lego versus My Little Pony. But after I learned that the latter belongs to a US firm, I opted for Lego. And as long as the trade row lingers, I will stick to my choice," Chen told the Global Times.

Zhang also stressed that if China is the target market for US companies, their efforts to carry out localized production with Chinese partners in the country will help them reduce uncertainties triggered by rising China-US trade tensions.

In July, Tesla Inc said that it had inked a deal with Chinese authorities to build a new auto plant in Shanghai. The localized production could help the electric car manufacturer bolster its presence in China while also hedging against the potential effect of auto tariffs.