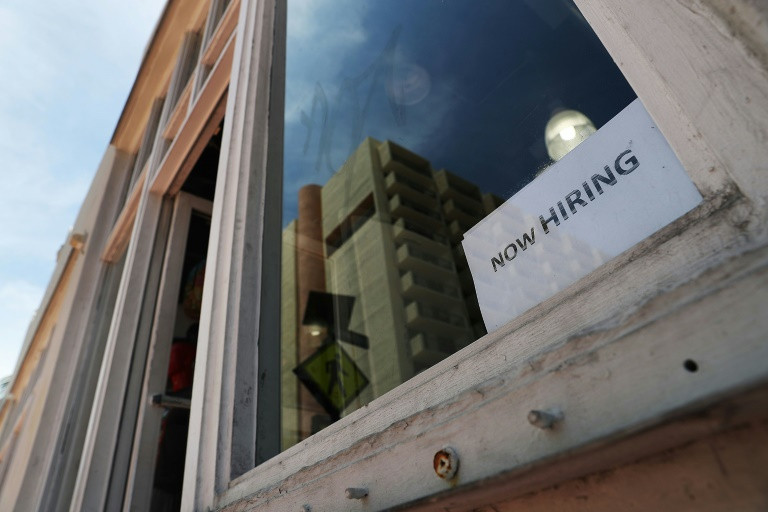 The tight US labor markets, which extend from low-skilled to high-tech positions, are fueling more widespread wage increases in a broader array of industries, according to a Federal Reserve survey. Photo: Reuters/Joe Raedle

American businesses are upbeat about 2018, but widespread difficulties finding workers are constraining growth for some firms, according to a Federal Reserve survey released Wednesday.

The tight labor markets, which extend from low-skilled to high-tech positions, are fueling more widespread wage increases in a broader array of industries, the nationwide survey showed.

Some firms expect they will have to raise wages in the months ahead.

All 12 Federal Reserve districts reported economic gains that were at least "modest to moderate" since November, while the Dallas district -- which includes the hurricane-stricken Houston area -- reported "a robust increase."

"The outlook for 2018 remains optimistic for a majority of contacts across the country," the Fed said.

However, the ongoing labor shortage "in some instances was described as constraining growth."

The Fed's so-called beige book survey, which gathers reports from businesses across the nation, was prepared for the central bank's first meeting of 2018, set for January 30 and 31.

The Fed is expected to increase its benchmark lending rate three times this year, after three increases in 2017, but is unlikely to make the first move until late March.

The central bank will be sure to keep a close watch on wages since that could feed into inflation, which has been running below the Fed's two percent target despite the falling unemployment rate and as economic growth has picked up steam.

Over the past year the beige book has reflected the increasing difficulty companies have filling positions, with many resorting to increasing wages, signing bonuses, and expanded training programs.

While most districts reported only modest wage increases so far, the latest survey shows the increases are occurring "in a broader range of industries and positions."

And firms in some districts "expect wages to increase in the months ahead."

The beige book showed only "modest to moderate price growth" since late last year, but Fed policymakers try to raise rates before wage and price pressures show up in the inflation data.

In other areas of the economy, the survey showed holiday retail sales were higher than expected, but home sales were held back by the "limited housing inventory," which echoes the findings of industry surveys.

Most manufacturers reported doing better, with modest growth in the final weeks of 2017, which allowed some to increase capital spending.