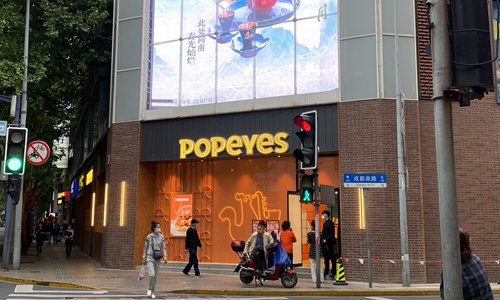 US fried chicken chain Popeyes has closed seven out of nine stores in the Chinese mainland, as it apparently failed to gain ground in one of the market over the past two years, while its sister brand Tim Hortons proceeds with an ambitious expansion push.

A search on catering information platform dianping.com showed that four outlets in Shanghai had shut down and they cannot be reached via the phone number. Only two stores, one in Huangpu district and the other in Pudong New Area, remained operational.

A customer service staffer with Popeyes confirmed to the Global Times on Tuesday that it had closed seven outlets in the Chinese mainland and only two stores in Shanghai remained open.

"We were not informed whether the stores will be closed permanently or opened later. We haven't received any specific notice nor the reason for the closure," the customer service staffer said.

Popeyes made its foray into the mainland market in May 2020 when it opened an outlet in Shanghai. The initial customers began queuing at 4am, and Popeyes had eyed an expansion in the mainland market with the possible opening of some 1,500 stores over 10 years, media reports said.

In stark contrast to Popeyes' rapid decline in the market, its sister brands - Burger King and Tim Hortons - have a strong presence.

Tims China has plans to expand its local network of stores to more than 2,750 by 2026, Chinese news site thepaper.cn reported on Tuesday.

Benefiting from the country's rapidly emerging coffee market, Tims China opened 100 outlets in the local market in 2020 and planned to increase its local presence to 388 by 2021, the report said.