BUSINESS US government's handling of TikTok cannot be compared to Google's departure from China: Kai-Fu Lee

US government's handling of TikTok cannot be compared to Google's departure from China: Kai-Fu Lee

Kai-Fu Lee, a prominent figure in the Chinese internet sector and former president of Google China, said that no Google reference can be taken from the Trump administration's handling of TikTok, after some public opinion leaders floated the idea of bringing Google Inc back to the Chinese market. 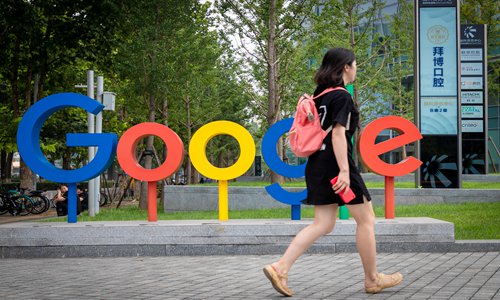 The brand logo of Google is seen outside its office in Beijing in August. (Photo: VCG)

Kai-Fu Lee, now chairman of Sinovation Ventures, said the US' handling of TikTok could never be compared to Google's entry into and exit from the Chinese market years ago, according to a WeChat group chat seen by the Global Times on Tuesday.

Discussions among Chinese internet industry veterans are heating as the drama surrounding the US' attempt to force the rapid sale of TikTok continues to unfold, and James Jianzhang Liang, chairman of Chinese tour operator Trip.com Group, reportedly said China should open up to US search engine Google and other mainstream global websites to contradict the illegitimacy of the US' proposed TikTok ban, according to a report by uzaobao.com on Tuesday.

After originally threatening to ban TikTok on "national security" and "data security" grounds, the Trump administration over the weekend moved to force the immediate sale of the hugely popular Chinese short-video app, and on Monday asked for a significant amount of money from a deal. Microsoft is believed to be the buyer.

Lee, who is familiar with Google's affairs in China, wrote that China has laid out clear and specific rules and regulations for foreign internet firms. He said Google entered the Chinese market and later chose to leave, with full understanding of these rules.

In contrast, the US government did not initially make clear what was required of TikTok to sustain its US business, nor did it substantiate its later accusations, Lee said, indicating a comparison between the China's handling of Google and the US' handling of TikTok could not stand.

Lee's comments, posted in a group chat named "500 old pals from the internet circle," were liked by several group members and resonated with some Chinese analysts.

Fang Xingdong, founder of Beijing-based technology think tank ChinaLabs and a member of the chat group, said Lee's comments were a restoration of truth and the facts at a time when many have surrendered good judgment to sentiment.

"Until today, many people's memories of how Google left the Chinese market have been distorted, and that is a misunderstanding that needs to be addressed," Fang told the Global Times on Tuesday.

Google's exit from the Chinese mainland and the US' handling of TikTok are both conflicts between corporations and governments, but they are by nature two utterly different matters, Fang said.

Google elected to shut down its search engine service in the Chinese mainland market in 2010.