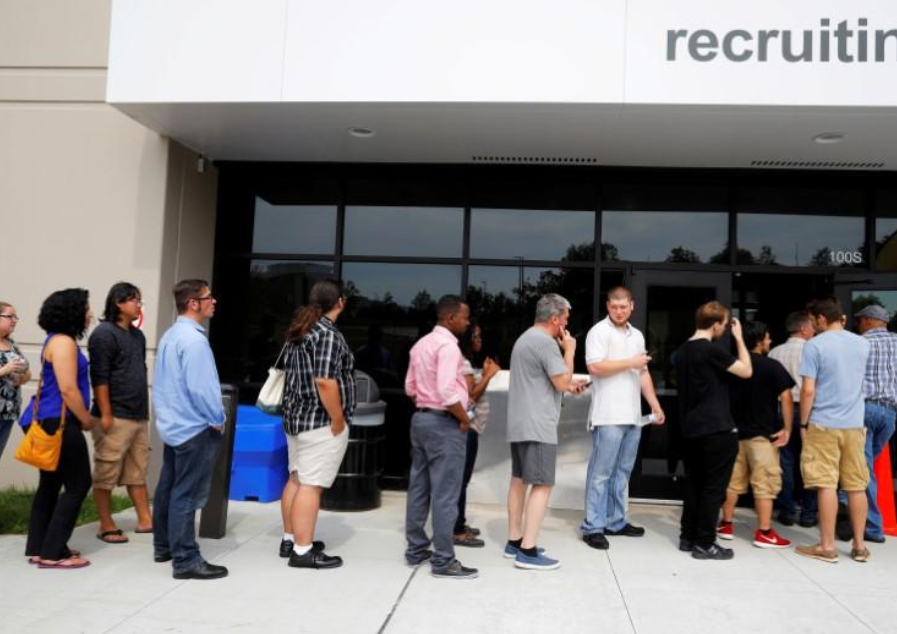 Job seekers line up to apply during "Amazon Jobs Day," a job fair being held at 10 fulfillment centers across the United States aimed at filling more than 50,000 jobs, at the Amazon.com Fulfillment Center in Fall River, Massachusetts, US, August 2, 2017. REUTERS/Brian Snyder/File Photo

US job growth surged in January and wages increased further, recording their largest annual gain in more than 8-1/2 years, bolstering expectations that inflation will push higher this year as the labor market hits full employment.

The unemployment rate was unchanged at a 17-year low of 4.1 percent. Average hourly earnings rose 0.3 percent in January to $26.74, building on December’s solid 0.4 percent gain.

That boosted the year-on-year increase in average hourly earnings to 2.9 percent, the largest rise since June 2009, from 2.7 percent in December. Workers, however, put in fewer hours last month likely because of bitterly cold weather.

The average workweek fell to 34.3 hours, the shortest in four months, from 34.5 hours in December.

The robust employment report underscored the strong momentum in the economy, raising the possibility that the Federal Reserve could be a bit more aggressive in raising interest rates this year. The US central bank has forecast three rate increases this year after raising borrowing costs three times in 2017.

“The acceleration in average hourly earnings growth punches a hole in the narrative that wage growth remains lackluster,” said Scott Anderson, chief economist at Bank of the West in San Francisco. “The Goldilocks view of inflation is being sorely challenged right now.”

Fed officials on Wednesday expressed optimism that inflation will rise toward the central bank’s target this year. Policymakers, who voted to keep interest rates unchanged, described the labor market as having “continued to strengthen,” and economic activity as “rising at a solid rate.”

US financial markets have priced in a rate hike in March. Prices for US Treasuries fell, with the yield on the benchmark 10-year note hitting a four-year high as investors worried about high inflation. The dollar rose against a basket of currencies on the data while US stocks were trading lower.

The unemployment rate dropped seven-tenths of a percentage point in 2017 and economists expect it to hit 3.5 percent by the end of the year. Economists say job gains are being driven by buoyant domestic and global demand.

Some worry that the Trump administration’s $1.5 billion tax cut package passed by the Republican-controlled US Congress in December, in the biggest overhaul of the tax code in 30 years, could cause the economy, already operating near full capacity, to overheat.

President Donald Trump and his fellow Republicans have cast the fiscal stimulus, which includes a reduction in the corporate income tax rate to 21 percent from 35 percent, as creating jobs and boosting economic growth.

“If the labor market is this strong and the tax cuts have yet to kick in, what will it look like when households and businesses actually start spending the money?” said Joel Naroff, chief economist at Naroff Economic Advisors in Holland Pennsylvania. “No good economy goes unpunished and the punishment may already be starting to be meted out.” 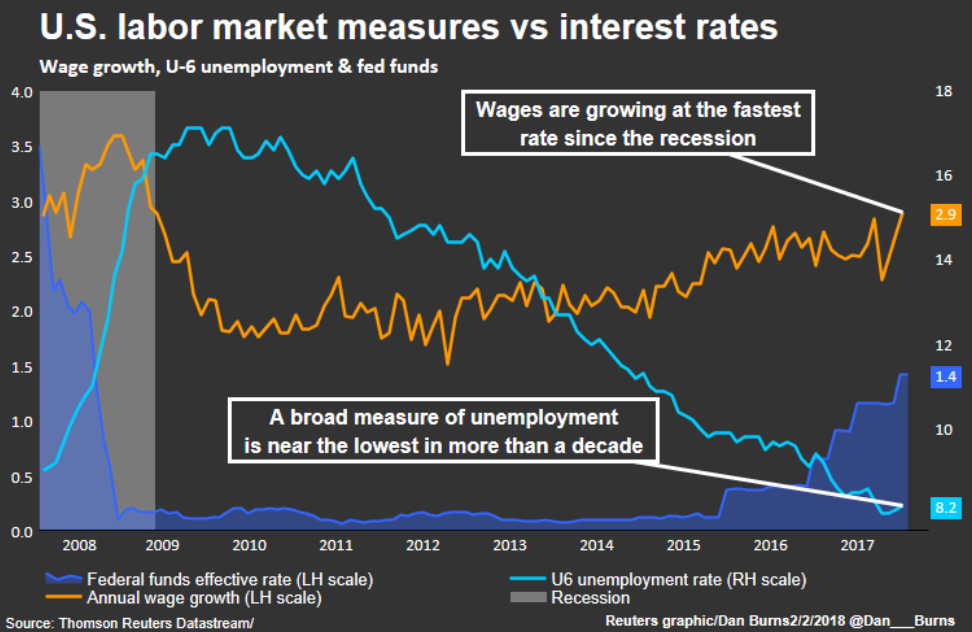 Economists polled by Reuters had forecast nonfarm payrolls rising by 180,000 jobs last month and the unemployment rate unchanged at 4.1 percent. January’s jobs gains were above the monthly average of 192,000 over the past three months.

The economy needs to create 75,000 to 100,000 jobs per month to keep up with growth in the working-age population.

January marked the first full year of employment data under the Trump administration. Job growth averaged 176,000 per month under the current government, compared to 208,300 during last year of the Obama administration.

Job growth is expected to slow this year as the labor market hits full employment. Companies are already reporting difficulties finding qualified workers, which economists say will force some to significantly raise wages as they compete for scarce labor.

Wage growth last month came as increases in the minimum wage came into effect in 18 states in January. Wages probably also got a lift from the tax cut. Companies like Starbucks Corp and FedEx Corp have said they will use some of the savings from lower taxes to boost wages for workers.

Further gains are expected in February when Walmart raises entry-level wages for hourly employees at its US stores. Annual wage growth is now close to the 3 percent that economists say is needed to push inflation towards the Fed’s 2 percent target.

But the road to faster wage growth remains long. The year-on-year rise in average hourly earnings for production and non-supervisory workers was stuck at 2.4 percent in January.

A broader measure of unemployment, which includes people who want to work but have given up searching and those working part time because they cannot find full-time employment, rose one-tenth of a percentage point to 8.2 percent in January.

The unemployment rate for African Americans shot up to 7.7 percent from 6.8 percent and is more than double that of whites.

Manufacturing payrolls increased by 15,000 last month after rising 21,000 in December. The sector is being supported by strong domestic and international demand. A weak dollar is also providing a boost to manufacturing by making US-made goods more competitive on the international market.

There were also increases in payrolls for professional and business services, leisure and hospitality as well as healthcare and social assistance.