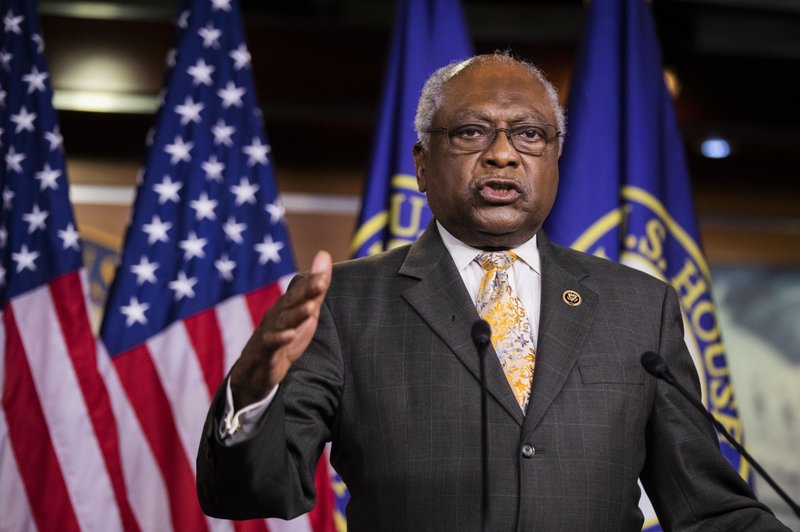 A Democratic-led subcommittee overseeing federal coronavirus aid is demanding that five companies return loans the panel says should have gone to smaller businesses.

The subcommittee led by Rep. James Clyburn, D-S.C., sent letters Friday to the companies as its first official action. The House voted last month to create the panel over the objections of Republicans who say it is partisan and duplicative of other oversight efforts around the federal government.

The panel said the companies they contacted received loans of $10 million or more, are all public, have more than 600 employees and have a stock market value of more than $25 million.

The letters were sent to EVO Transportation & Energy Services Inc., a transportation operator in Arizona; Gulf Island Fabrication Inc., a manufacturer of marine vessels used in the energy sector based in Texas; MiMedx Group Inc., a biopharmaceutical company based in Georgia; Quantum Corporation, a video streaming and storage company based in Silicon Valley, California; and Universal Stainless & Alloy Products Inc., a steel manufacturer based in Pennsylvania.

The letters ask the companies to respond by Monday and inform the committee whether they are returning the money and by what date. They say that the law providing the aid was passed by Congress to be a lifeline for small businesses who might be forced to lay off employees or shut down entirely.

“We did not intend for these funds to be used by large corporations that have a substantial investor base and access to capital markets,” the Democrats wrote.

Almost 50 public companies have already pledged to return money to the government’s $600 billion-plus emergency lending program as Treasury Secretary Steven Mnuchin has threatened criminal prosecutions for violating the rules. The administration has given companies until May 14 to give back money without penalty.

The Small Business Administration also says it will audit every loan exceeding $2 million, and if problems are found, it will withhold the program’s offer to forgive the loan.

A recent Associated Press investigation found that at least 147 public companies received $555 million of the potentially forgivable loans. Some had market values well over $100 million, and many had executives earning millions annually.

All five companies contacted by Democrats received $10 million loans, and most have stock market values far above $25 million. EVO Transportation & Energy Services, for example, has a market capitalization of $161 million, and its shares are up 180% in 2020.

Republicans on the committee did not sign the letters and criticized the Democrats for sending them.

“It is outrageous and telling that the first action committee Democrats have taken is blindly sending harassing letters to individual companies that followed the law to keep their workers on the payroll,” said Louisiana Rep. Steve Scalise, the top GOP member on the panel and the No. 2 House Republican.

Scalise said the panel should be working “on a bipartisan basis to help families safely get back to work, and start holding China accountable for the devastation they perpetrated on the American people.”

Meanwhile, members of a separate, bipartisan congressional oversight commission said Friday that they have begun to review actions taken by the Treasury and Federal Reserve to lend money to businesses as part of the economic rescue law — even though the panel doesn’t yet have a chairman.

The rescue aid law dictates that House Speaker Nancy Pelosi and Senate Majority Leader Mitch McConnell appoint the panel’s leader, but they have yet to do so.

The statement came as the commission was required to issue a report 30 days after the first money went out under the law.

“Although we will not issue a report today, we are working to fulfill our responsibilities, even in the absence of a staff, a budget and a chairperson, and intend to publish one soon,” the four commissioners said.

The four members who have been appointed so far are Sen. Pat Toomey, R-Pa., and Reps. Donna Shalala, D-Fla., and French Hill, R-Ark., along with former Senate Democratic aide Bharat Ramamurti.