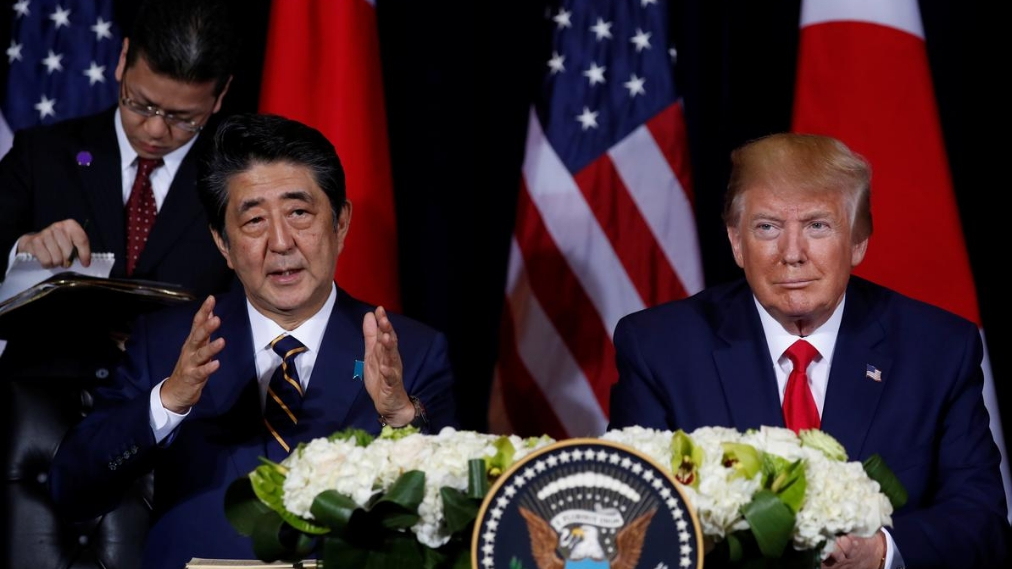 US President Donald Trump and Japanese Prime Minister Shinzo Abe signed a limited trade deal on Wednesday that cuts tariffs on US farm goods, Japanese machine tools and other products while further staving off the threat of higher U.S. car duties.

Trump said the deal would open up Japanese markets to some seven billion US dollars worth of American products annually, cutting Japanese tariffs on US beef, pork, wheat and cheese.

US Trade Representative Robert Lighthizer said after a signing ceremony between the two leaders on the sidelines of the United Nations General Assembly that cars — the biggest source of the 67-billion-US-dollar US trade deficit with Japan — were not covered in the announcement.

Japan wanted further discussions on this issue, Lighthizer said.
It was not the US intention to impose so-called Section 232 national security tariffs on Japanese autos and auto parts and the two sides would work together in good faith, aiming to start talks on phase two of an agreement next April, he said.
Japanese Foreign Minister Toshimitsu Motegi, who had negotiated the pact with Lighthizer, was more direct in saying that Japan received assurances that car tariffs would not be implemented.

"As long as the agreement is implemented faithfully, Section 232 will not be applied. This is what Prime Minister Abe confirmed with President Trump at the summit meeting," Motegi told reporters.
A Japanese government statement also said further talks would seek to eliminate the existing 2.5-percent US tariff on Japanese cars and would not result in the imposition of US import quotas on Japanese autos.
Lighthizer, during a previous stint at USTR in the 1980s, helped negotiate voluntary export restraints on Japanese autos, which led to increased U.S. production by Japanese automakers. But Japan still exports about 1.7 million cars a year to the United States, making up about 10 percent of U.S. vehicle sales.
Wednesday's deal was met with cautious praise from farm groups and lawmakers, who said they looked forward to a more complete deal.

Japan's Prime Minister Shinzo Abe (L) shakes hands with US President Donald Trump during a signing ceremony on the sidelines of the 74th session of the UN General Assembly in New York City, New York, US, September 25, 2019. /Reuters Photo

Representative Jackie Walorski, an Indiana Republican, said she was "encouraged the deal will mean fewer barriers to digital trade and more certainty that costly auto tariffs will not threaten American jobs or raise prices for consumers."
The US-Japan talks, launched a year ago, hit a snag earlier this week as Japan had sought last-minute assurances that Trump would not impose the Section 232 tariffs.
The US Trade Representative's office characterized the agreement signed by Trump and Abe as "early achievements" from their negotiations on market access for agriculture, industrial goods and digital trade.
The deal could provide some limited relief for US farmers, who have been battered by China's retaliatory tariffs against US soybeans, pork and other products in the 15-month-long trade war between Washington and Beijing.

Under the agreement, Japan would open new markets to about seven billion US dollars in American agricultural products, Trump said. "Japanese tariffs will now be significantly lower or eliminated entirely for US beef, pork, wheat, cheese, corn, wine and so much more."
Trump later praised China's recent agricultural purchases as "goodwill" measures and said a deal with Beijing could come sooner than people think.
Trump also said signing ceremony with Abe that the deal's first phase would cover 40 billion US dollars worth of digital trade between the world's largest and third-largest economies.
The USTR said about 90 percent of US food and agricultural products will receive duty-free or reduced-tariff access to Japan, but wheat will still be subject to a quota limiting the volume of US imports.

However, many of the products gaining new access will still face tariffs that phase out over several years, including wine, ethanol, cheeses, processed pork, poultry, frozen potatoes, oranges, cherries and egg products.
Motegi told reporters that the tariff cuts on US farm products are "within the range" of tariff cuts granted to countries in the Trans-Pacific Partnership trade deal, which Trump quit in 2017.
Japan will see reduced or eliminated tariffs on a small amount of agricultural goods, including cut flowers and soy sauce, and a wide range of industrial goods, including steam power turbines, machine tools, bicycles and musical instruments.
The digital trade agreement largely follows the US model of internet development, prohibiting taxes on cross-border digital downloads and rules requiring so-called data localization — the storing of data on devices physically present within a country's borders, the USTR said.