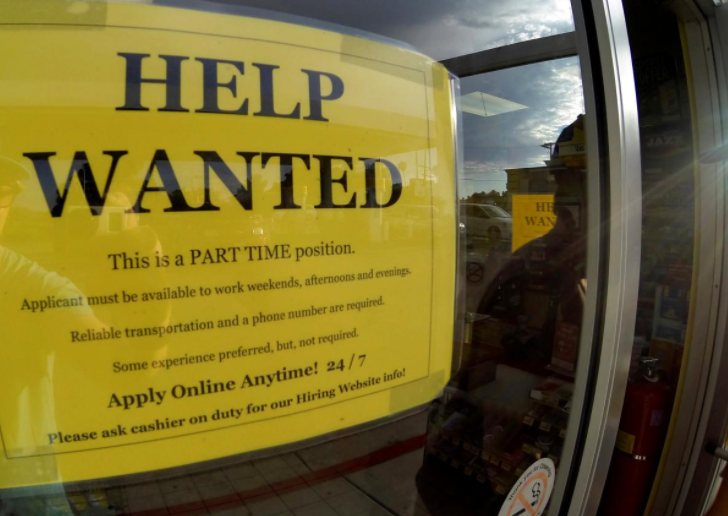 A help wanted sign is posted on the door of a gas station in Encinitas, California, US, September 6, 2013. (Photo: Reuters)

The number of Americans filing for unemployment benefits fell last week, pointing to sustained labor strength even as economic growth appears to have slowed early in the first quarter.

Other data on Thursday showed an increase in the prices of imported goods in February amid weakness in the US dollar and rising commodity prices, bolstering expectations that inflation will pick up this year.

Import prices are likely to rise further after President Donald Trump last week imposed tariffs on steel and aluminum imports to shield domestic industries from what he has described as unfair competition from other countries.

Labor market strength and a steady increase in price pressures could pave the way for the Federal Reserve to raise interest rates at its March 20-21 policy meeting. The US central bank has forecast three rate increases for this year, but some economists believe it will raise its projection to four hikes at the meeting.

“The strong willingness of companies to hold onto labor is a strong signal of the difficulty of replacing workers,” said John Ryding, chief economist at RDQ Economics in New York. “At this point we would expect another robust gain in jobs (in March) and a drop in the unemployment rate to 4.0 percent.”

The economy created 313,000 jobs in February and the unemployment rate remained at a 17-year low of 4.1 percent.

Initial claims for state unemployment benefits declined 4,000 to a seasonally adjusted 226,000 for the week ended March 10, the Labor Department said. Claims fell to 210,000 during the week ended Feb. 24, the lowest level since December 1969.

Claims have now been below the 300,000 threshold, which is associated with a strong labor market, for 158 straight weeks. That is the longest such stretch since 1970, when the labor market was much smaller. Fed officials consider the labor market to be near or a little beyond full employment.

Economists are optimistic that tightening labor market conditions will boost wage growth in the second half of this year. That should help to underpin consumer spending, which slowed at the start of the year.

The government reported on Wednesday that retail sales fell in February for a third straight month. Data on home sales, business spending on equipment and industrial production in January have also been weak.

Gross domestic product growth estimates for the first quarter are as low as 1.7 percent at an annualized rate. The economy grew at a 2.5 percent pace in the fourth quarter, the government reported last month. 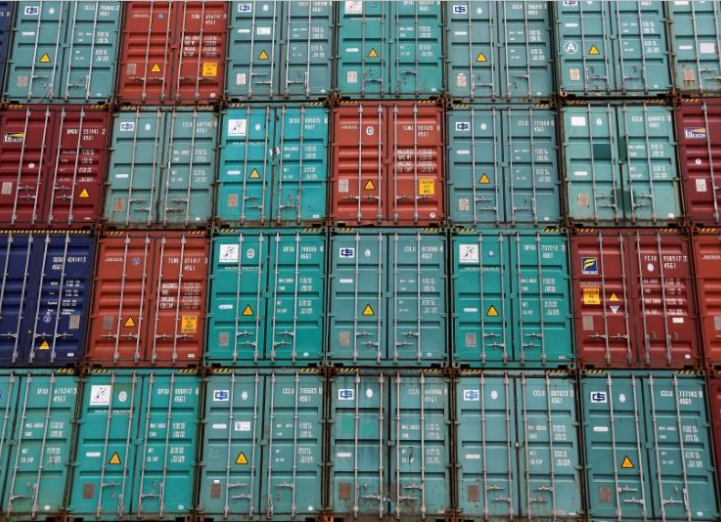 A stack of shipping containers are pictured in the Port of Miami in Miami, Florida, US, May 19, 2016. (Photo: Reuters)

But revisions to December data on construction spending, factory orders and inventories have suggested the fourth-quarter growth estimate could be raised to a 3.1 percent pace. The government will publish its third GDP growth estimate for the fourth quarter later this month.

The US dollar .DXY was stronger against a basket of currencies in midday trading. US government bond prices were slightly weaker and US stock indexes rose as industrial stocks mounted a recovery after three days of losses. 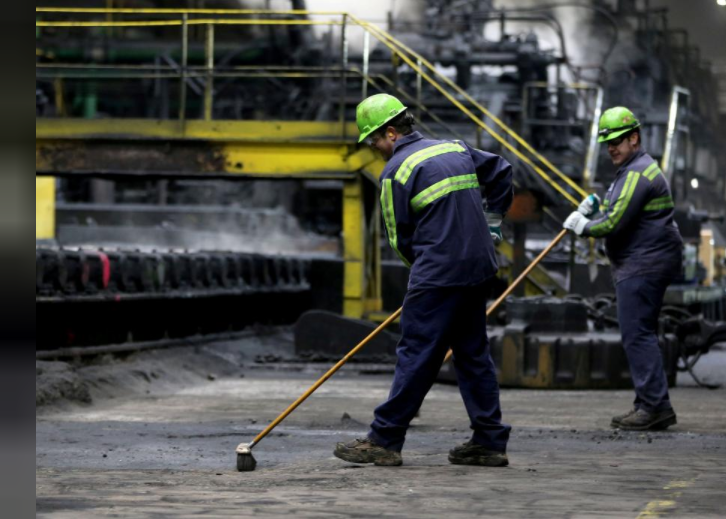 Workers clean up around the steel slab roller line at the Novolipetsk Steel PAO steel mill in Farrell, Pennsylvania, US, March 9, 2018. (Photo: Reuters)

The Philadelphia Fed said firms in the mid-Atlantic region reported difficulties finding skilled workers, especially those with specific machine and tool skills. It said more than half the firms were raising wages to address the shortages.

The firming inflation trend was corroborated by a fourth report from the Labor Department showing import prices rising 0.4 percent last month after accelerating 0.8 percent in January.

That lifted the year-on-year increase in import prices to 3.5 percent from January. Prices for imported capital goods jumped 0.6 percent in February, the biggest increase since April 2008, after being unchanged in January.

Prices of imported consumer goods excluding automobiles rose 0.5 percent, the largest gain since January 2014, after edging up 0.1 percent in the prior month. These price increases likely reflected the dollar’s depreciation against the currencies of the United States’ main trading partners, and will eventually filter through to core producer and consumer inflation.

The dollar has lost 9.1 percent of its value on a trade-weighted basis since January 2017. Imported iron and steel prices increased 2.2 percent last month and were up 12.6 percent on a year-on-year basis. The cost of imported aluminum rose 0.4 percent, pushing the annual increase to 10.3 percent.

Trump slapped tariffs of 25 percent on steel imports and 10 percent on aluminum imports.

“Leading up to the March announcement of steel and aluminum tariffs, import prices for both metals were already up by double-digits this past year,” said Sarah House, a senior economist at Wells Fargo Securities in New York. “Assuming tariffs are limited to aluminum and steel, we expect only a marginal effect on final consumer prices.”