BUSINESS US jobs growth expected to regain momentum in April

US jobs growth expected to regain momentum in April

US job growth likely accelerated in April after a weather-related slowdown in the previous month, with the unemployment rate expected to drop to near a 17-1/2-year low of 4.0 percent. 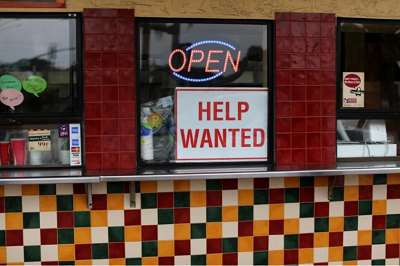 The Labor Department’s closely watched employment report on Friday is also expected to show steady wage growth, which would add to signs of building inflation pressures and likely keep the Federal Reserve on a gradual path of monetary policy tightening.

The US central bank on Wednesday left interest rates unchanged and said it expected annual inflation to run close to its “symmetric” 2 percent target over the medium term.

Economists interpreted symmetric to mean policymakers would not be too concerned with inflation overshooting the target.

Non-farm payrolls probably increased by 192,000 jobs last month, according to a Reuters survey of economists. Payrolls rose by 103,000 positions in March, the smallest gain in six months, which economists dismissed as payback after unseasonably mild weather boosted hiring by 326,000 jobs in February.

The anticipated decline in the unemployment rate from 4.1 percent in March would put it at a level last seen in December 2000 and within striking distance of the Fed’s forecast for 3.8 percent by the end of this year.

“The high-frequency indicators coming from the labor market continue to look rock solid, there is no real indication that the labor market is slowing down,” said Scott Anderson, chief economist at Bank of the West in San Francisco. “From the Fed’s perspective we are already at or below full employment.”

The Employment Cost Index (ECI), widely viewed by policymakers and economists as one of the better measures of labor market slack, increased solidly in the first quarter. The ECI report showed wages rising at their fastest pace in 11 years during the period.

Even with the annual increase in average hourly earnings still moderate, inflation is flirting with the Fed’s target. The Fed’s preferred inflation measure, the personal consumption expenditures price index excluding food and energy, was up 1.9 percent year-on-year in March after a 1.6 percent rise in February.

“In an environment where productivity growth is remaining very weak, you actually don’t need a particularly large rise in wage growth to be consistent with the Fed’s 2 percent inflation target,” said Michael Pearce, a senior US economist at Capital Economics in New York. 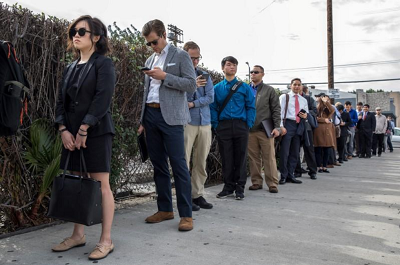 Job seekers line up at TechFair in Los Angeles, California, US March 8, 2018.

The Fed hiked rates in March and has forecast at least two more increases for this year.

Economists expect the unemployment rate will drop to 3.5 percent by the end of the year. The economy needs to create roughly 120,000 jobs per month to keep up with growth in the working-age population. Employment gains averaged 202,000 jobs per month in the first quarter.

Some economists, however, caution that April’s job growth could come in below expectations, citing declines in measures of manufacturing and services sector employment during the month. More businesses are complaining about shortages of skilled workers.

A consumer confidence survey showed households’ assessments of current labor market conditions falling for a second straight month in April. In addition, cold temperatures persisted last month in some parts of the country.

“We have seen historically poor weather, which we expect will act as a temporary headwind to April job growth,” said Ellen Zentner, chief economist at Morgan Stanley in New York.

“Weather-sensitive construction and leisure/hospitality jobs in particular will likely be negatively impacted by the weather swing, so we expect those industries to take a meaningful hit.”

Still, manufacturing payrolls are expected to have rebounded last month after recording their first drop in eight months in March. Manufacturing employment is forecast rising by 20,000 jobs in April after a gain of 22,000 positions in March.

Government payrolls are seen falling by 2,000 jobs in April.