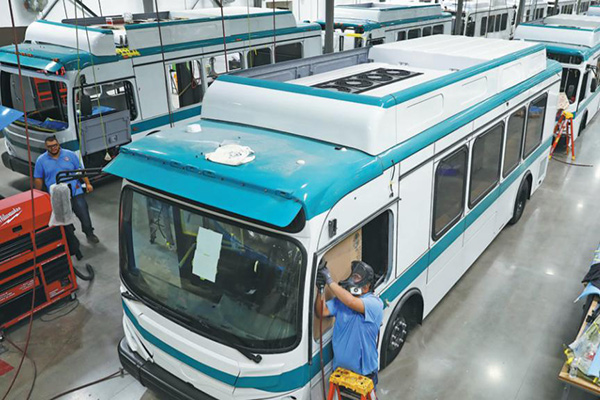 An employee works on the window frame of an electric bus at the BYD Coach and Bus factory in Lancaster, California. (Photo: Agencies)

HOUSTON - The US Purchasing Managers' Index (PMI) survey for June highlighted a clear loss of momentum for the manufacturing sector, following the strong growth rates seen in recent months, according to data released by the IHS Markit on Friday.

The seasonally adjusted IHS Markit Flash US Manufacturing PMI registered 54.6 in June, down fractionally from 56.4 in May, signaling the slowest improvement in overall business conditions since November 2017.

Adjusted for seasonal influences, the IHS Markit Flash US Composite PMI Output Index registered 56.0 in June, down only slightly from 56.6 in May, a 37-month peak. The latest reading signaled that private sector output continued to expand at one of the fastest rates seen over the past three years.

A robust rate of service sector growth helped to underpin the overall upturn in private sector output during June.

At 56.5, down slightly from 56.8 in May, the seasonally adjusted IHS Markit Flash US Services PMI Business Activity Index posted its second-highest reading since April 2015.

Commenting on the flash PMI data, Chris Williamson, chief business economist at HIS Markit, said, "The flash PMI surveys add to evidence that the US economy is enjoying a strong second quarter. Despite growth cooling slightly in June, the latest numbers round off the best quarter for three years and suggest economic growth has lifted markedly higher than the 2.3 percent rate of expansion seen in the first quarter to well over 3 percent."

London-based IHS Markit is a global company in critical information, analytics and solutions for the major industries and markets that drive economies worldwide.