BUSINESS US, Mexico to cooperate on semiconductors, electric vehicles

US, Mexico to cooperate on semiconductors, electric vehicles 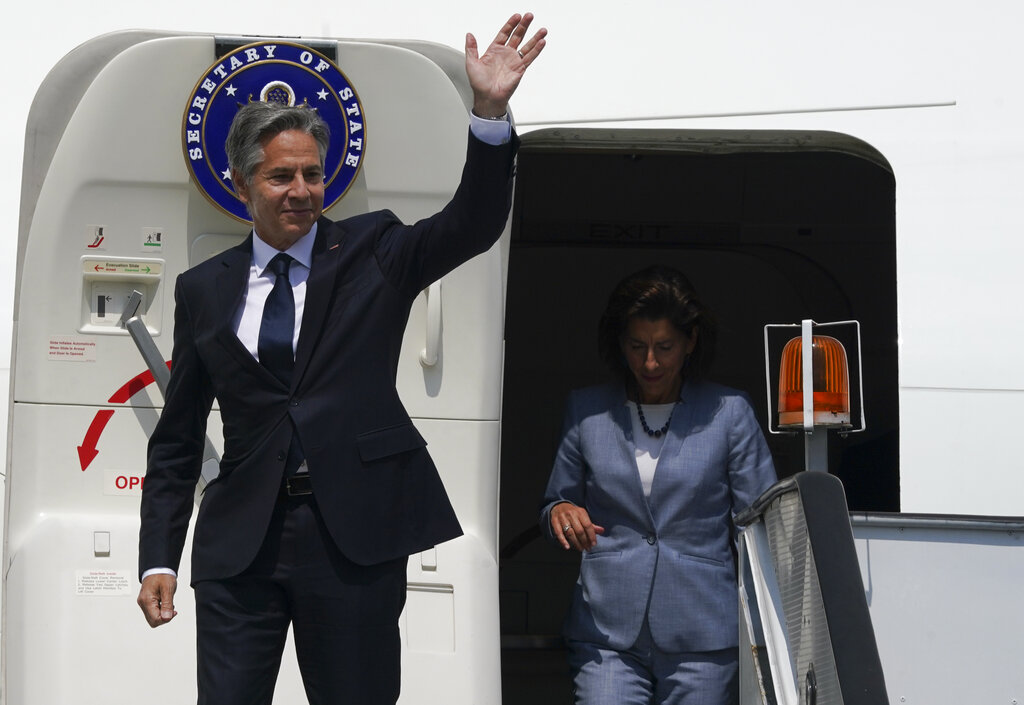 US Secretary of State Antony Blinken waves in front of US Commerce Secretary Gina Raimondo as they deplane at Benito Juarez International Airport in Mexico City, Monday, Sept. 12, 2022. (Photo: AP)

Mexico and the United States plan to take advantage of the Biden administration's massive investment in semiconductor production to push the integration of their supply chains and cooperate on expanding the production of electric vehicles through Mexico's nationalized lithium industry, officials from both countries said Monday

Both efforts seek to eat into Asia's advantage in semiconductors and batteries needed for electric vehicles and promote North American production.

They were among the main topics discussed within and on the sidelines of the two countries' High-Level Economic Dialogue in Mexico's capital.

“Major elements of the semiconductor supply chains are already well established in Mexico, with U.S. based companies like Intel and Skyworks conducting research and development, design, assembly and test manufacturing in parts of Mexico,” U.S. Secretary Antony Blinken said.

Blinken and U.S. Commerce Secretary Gina Raimundo had spoken earlier in the day with Mexico President Andrés Manuel López Obrador about the opportunities for Mexico to take advantage of recently passed U.S. legislation that would provide $28 billion in incentives for semiconductor production, $10 billion for new manufacturing of chips and $11 billion for research and development.

López Obrador, for his part, explained his plan to make the northern border state of Sonora a leader in lithium, electric vehicle and solar energy production, Mexico Foreign Affairs Secretary Marcelo Ebrard said. Lithium is a key component of batteries for electric vehicles. The president said last month he had already discussed the idea with U.S. President Joe Biden.

Blinken said another piece of new U.S. legislation aims to incentivize the shift to electric vehicles and the production of the batteries they need in North America.

Ebrard said it was a big opening for Mexico's economy.

“This means more jobs for Mexico, more integration,” Ebrard said. “We think Mexico could grow twice as much with what was proposed to Mexico today and this means we can reduce poverty even faster in our country and that the infrastructure of Mexico can grow faster.”

The dialogue, which was launched by then-Vice President Biden in 2013, resumed last year in Washington after stopping during the Trump administration.

The global shortage of semiconductors has slashed into production of autos, household appliances and other goods, fueling high inflation. Biden appeared at the future site of a massive Intel plant in Ohio on Friday.

Last month, López Obrador said the government had created the state-run lithium company that would be in charge of the exploration and extraction of the mineral. Mexico nationalized lithium production in May.

Asked about ongoing trade disputes between the U.S. and Mexico in the energy sector, officials from both countries downplayed the disputes and emphasized that there was a separate process for resolving those disagreements under their trade accord and that it was not an agenda item for these meetings.

Ahead of the talks, Assistant Secretary for Western Hemisphere Affairs Brian Nichols, who is also attending, said one of the priorities for the talks was promoting development in southern Mexico and Central America.

U.S. border agents’ encounters with migrants from the Northern Triangle countries -- El Salvador, Honduras and Guatemala -- have been running lower this year than last, despite overall encounters at the border being up this year, according to U.S. Customs and Border Protection data. Encounters with Mexican migrants have also been higher for most of the past year.

Mexico has more recently avoided direct clashes with migrants moving across its territory, instead regularly offering them temporary documents to relieve pressure at its southern border.