As hopes fade for the easing of trade tension between China and the US, it appears that the US is betting on Chinese officials caving in due to economic pressure. But this would be a dangerous miscalculation that could lead to further escalation, analysts said Monday. 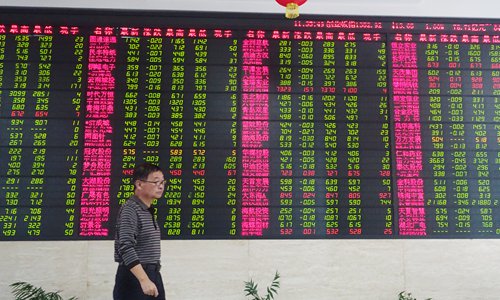 An investor at a stock brokerage in Fuyang, East China's Anhui Province, on Monday (Photo: VCG)

While there is indeed downward pressure, the Chinese economy is not in as much difficulty as some US officials have suggested, analysts noted. Instead, the domestic economy has shown strong resilience, they said.

Recent media reports had suggested that US officials would invite their Chinese counterparts to Washington for trade talks, but US President Donald Trump put an end to hopes of cooperation.

The tweet is the latest sign that the US is determined to carry on the trade war based on calculations that the Chinese economy is going to collapse and that Chinese officials will eventually buckle.

Not as bad as it seems

"While it is true that the Chinese economy is facing some challenges, the US is misjudging the willpower of China and the resilience of the Chinese economy," Jiang Yong, a research fellow at the China Institutes of Contemporary International Relations in Beijing, told the Global Times.

"If the US continues with tariffs based on such a miscalculation, there will be no possibility of any reconciliation and the trade war will eventually hurt both sides," Jiang said.

Zhu Haibin, JP Morgan's chief China economist, said that the outlook for the Chinese economy in 2018 is not as grim as some have suggested, adding that there has been a recent slowdown only in certain sectors rather than in the entire economy.

"In 2018, overall we are not pessimistic [about economic growth in China]," Zhu told a media briefing in Beijing on Monday, adding that JP Morgan expects the Chinese economy to grow by 6.6 percent this year - slightly above the target of 6.5 percent set by Chinese policymakers earlier in the year.

Zhu pointed out that the decline in the Chinese stock market this year has exceeded the level of the economic slowdown, "so we call this over-correcting."

There is a chance stocks may rebound before the year's end if investment in infrastructure improves and the economic slowdown is in line with market expectations, Zhu noted.

China's stock market has dropped sharply so far this year, with the Shanghai Composite Index falling by about 19.7 percent, as of Friday. On Monday, the index dropped by 1.11 percent from Friday to 2,651.79.

"People tend to overlook the overall picture of the Chinese economy whenever there are any negative signs," Li Daxiao, chief economist at Shenzhen-based Yingda Securities, told the Global Times on Monday. "They always forget that the Chinese economy is still one of the fastest-growing in the world, that we have about $3 trillion in foreign exchange reserves and that China has a massive domestic market."

Li noted that despite positive signs, including a buoyant jobs market and a thriving stock market, the US economy is also facing a slew of risks, including trade tension not just with China, but with many other major economies.

Zhu also suggested that record highs in the stock market might mean that the upswing in the US economy is approaching an end.

"In 2019, the US economy might face a downward trend. Our officials estimate that US growth will reach 2.9 percent this year, 2.9 percent next year, and a much lower level in 2020," Zhu said.