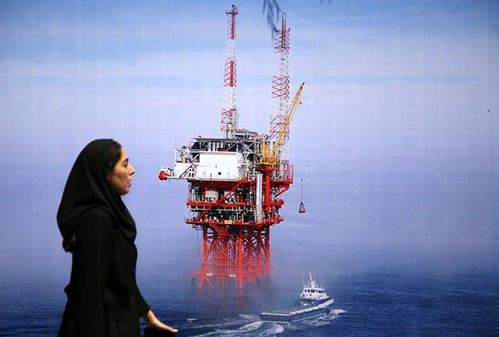 A woman walks past a poster at the 23rd International Oil, Gas, Refining & Petrochemical Exhibition organized by the Iranian Ministry of Petroleum in Tehran in May. (Photo: IC)

The US sanction threat for countries that continue to buy oil from Iran won't shake China's energy sector, which is not dependent upon any single overseas market for oil imports, experts said on Monday. For China, companies that could face a real threat are high-tech firms that are highly reliant upon the US market or US technologies, as the US might use oil trading as an excuse to increase the weight of tariffs on imports from China, the experts said. The US has requested that all countries, including China, should not import oil from Iran starting from November 4, according to a report by the Economic Times on June 27. Countries that don't obey will face sanctions from the US, the report noted, without elaborating on what form these sanctions might take. Xi Jiarui, an oil analyst at domestic commodities information website 315i.com, said that the US sanctions could be multi-faceted if China continues to buy oil from Iran. "They will stop US companies from investing in China's energy sector. Or they will conduct broader economic sanctions, like imposing heavier tariffs on Chinese goods," Xi told the Global Times on Monday. A spokesman for the Ministry of Foreign Affairs said during a press conference on May 17 that China will continue to maintain economic and trade relations with Iran on the basis of not violating China's international obligations. State-owned oil giant China National Petroleum Corp couldn't be reached for comment by press time, and Sinopec Group, also a State-owned energy giant, declined to comment. High-tech factorLin Boqiang, director of the China Center for Energy Economics Research at Xiamen University, said that just in terms of the energy sector, China is not afraid of any sanction measures from the US."China does not rely heavily on any single country for oil. So if we cut oil trade ties with Iran or the US, we could easily find other sources like Russia or other Middle East countries," Lin told the Global Times on Monday. The price of oil has surged since the US' sanction threat, but Lin also said that the price hike won't last long as Saudi Arabia and Russia will increase production as countries stop buying Iranian oil.The price of the Brent Crude contract for September edged down by 1.46 percent to $78.07 by 10:05 pm on Monday.According to Xi, China imported about 8 million tons of crude from Iran in the first quarter this year, surpassing the 3.9 million tons imported from the US.

Wu Chenhui, a Beijing-based independent analyst, also said that the US' sanction threat is illogical. "Countries have their own right to decide whether or not to trade with Iran. On what grounds can the US force other countries to follow their stance with Iran?" But both Lin and Wu said that some Chinese companies rely heavily on the US market, especially in the high-tech sector, and they could be affected by US retaliation if China insists on maintaining its oil trade with Iran. "The situation is that if the US escalates the trade war, it will hurt Chinese companies; but it will hurt US companies as well. So I don't think the US will let things worsen significantly," Lin said. Xi said that China can react by allowing the yuan to depreciate as a countermeasure.