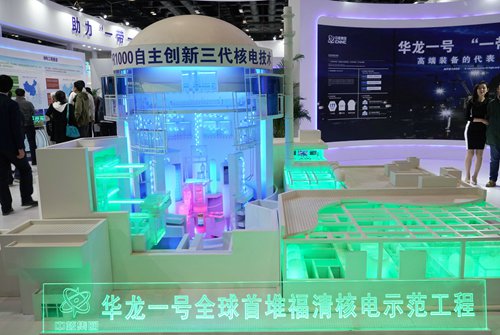 The stand of Hualong One reactor is shown at the China International Nuclear Industry Exhibition held in Beijing in March 2018. (Photo: VCG)

The US has added China General Nuclear Power Corp (CGN), China's largest state-owned nuclear company, and several of its subsidiaries to its Entity List, barring US companies from selling products to those enterprises.

Experts said that the ban is part of a series of US moves to crack down on China's high-technology sector, but those moves have in effect accelerated China's efforts to seek technological independence.

The US government said that companies on the entity list have been acting "contrary to" the US' national security or foreign policy interests, according to a statement published by the Federal Register on its website.

Commenting on the US' move, Chinese Foreign Ministry Spokesperson Hua Chunying said on Thursday that the US is abusing the use of export control measures.

It is not only hurting Chinese companies but also affecting overseas companies including those from the US, Hua said.

"After preliminary evaluation, the incident's influence on CGN is controllable," CGN said in a statement it sent to the Global Times on Wednesday.

Some of the nuclear power plants being built by CGN are reportedly based on technology from US nuclear plant builder Westinghouse Electric.

The US announced in October 2018 it would tighten controls on China's imports of civil nuclear technology to prevent its use for military or other purposes amid China-US trade tensions.

"How much the ban hurts CGN and its subsidiaries depends on whether those Chinese companies need to import some irreplaceable but key technologies or products from the US. As far as I know, the answer is no," Lin Boqiang, director of the China Center for Energy Economics Research at Xiamen University, told the Global Times on Thursday.

Another nuclear expert told the Global Times on condition of anonymity that China has been striving to end its dependence on foreign technology and products in recent years.

"The third generation of Chinese nuclear technology, the Hualong One, was independently developed by China. Although some components of the nuclear reactor were imported, it's already a significant improvement compared with the AP1000 technologies whose control and instrumentation systems are entirely imported," the expert said.

Wu Chenhui, an independent energy expert, said that the US ban on nuclear exports shows that the ultimate intent of the US trade war with China is to thwart China's development in the high-technology sector.

"In recent years, China has shifted its focus to high-technology research and development, and the trade war has added to China's determination to be self-reliant in high technologies as well as accelerated this process," Wu told the Global Times, but cautioning that domestic technology companies should have "reserve plans" when cooperating with overseas partners.